The Rochester Institute of Technology Dubai (RIT Dubai) had reason to celebrate last night when over 120 undergraduate and postgraduate students were awarded degrees during the institution’s sixth annual commencement ceremony held at the Intercontinental Hotel, Dubai Festival City.

The occasion marked two landmark achievements for the university- the bestowing of degrees for the institutions’ first cohort of Bachelor of Science in Computer Science students and pioneering Master of Science in Professional Studies: City Science students. The City Science Master’s program is a first-of-its-kind degree in the MENA region, developed in association with Dubai Silicon Oasis Authority and Smart Dubai to help planners design and build smart, efficient, sustainable and community-based cities.

26 Emiratis were also honored for completing the university’s Corporate Happiness Diploma, a groundbreaking program run in conjunction with the emirate’s Smart Dubai Office and international performance management consulting company Gallup that was developed to help fulfil the Happiness Agenda launched by His Highness Sheikh Mohammed Bin Rashid Al Maktoum, Vice-President and Prime Minister of the UAE and Ruler of Dubai earlier this year.

Amongst the graduates celebrated over the course of the evening were Mashal Waqar, Bachelor of Science in Computing Security, who was winner of the President’s Cup, and Essa Al-Shahei, who was named the class of 2017’s Valedictorian.

Commenting on the evening, Dr Yousef Al-Assaf, President of RIT Dubai, said: “RIT Dubai aligns its educational offering with the innovative vision of Dubai and the wider UAE. We deeply appreciate the support we have received from the DSOA, Smart Dubai Office, the UAE Ministry of Education Higher Education Affairs, and several other prominent stakeholders in launching our latest programs. The graduation of our first cohort of students from three programs today is indeed a proud moment for everyone involved. We congratulate all of this evening’s graduates and wish them the very best in their future journeys.”

H.E. Sheikh Khalid bin Zayed Al Nahyan, Chairman of the RIT Board of Directors, added: “RIT Dubai has created a number of highly-thought-after programs that help our students adapt to change. Thanks must go especially to Sheikh Ahmed bin Saeed Al Maktoum, Chairman of Dubai Silicon Oasis Authority, for his continued belief in the university which has allowed us to deliver the type of learning that is required to take the UAE from strength to strength.”

Dr. William W. Destler, President of RIT New York, who is retiring this year, concluded: “The government of Dubai along with Dubai Silicon Oasis has welcomed RIT with warmth and support. Because of our unique partnerships, I anticipate huge further growth for RIT Dubai. Our alumni are in an excellent position to continue to develop the UAE’s economy.”

As the only university in Dubai Silicon Oasis, RIT Dubai is uniquely positioned as a bridge between education and industry. Plans are underway to move to a new state of the art campus in the next few years and expand its program offerings. 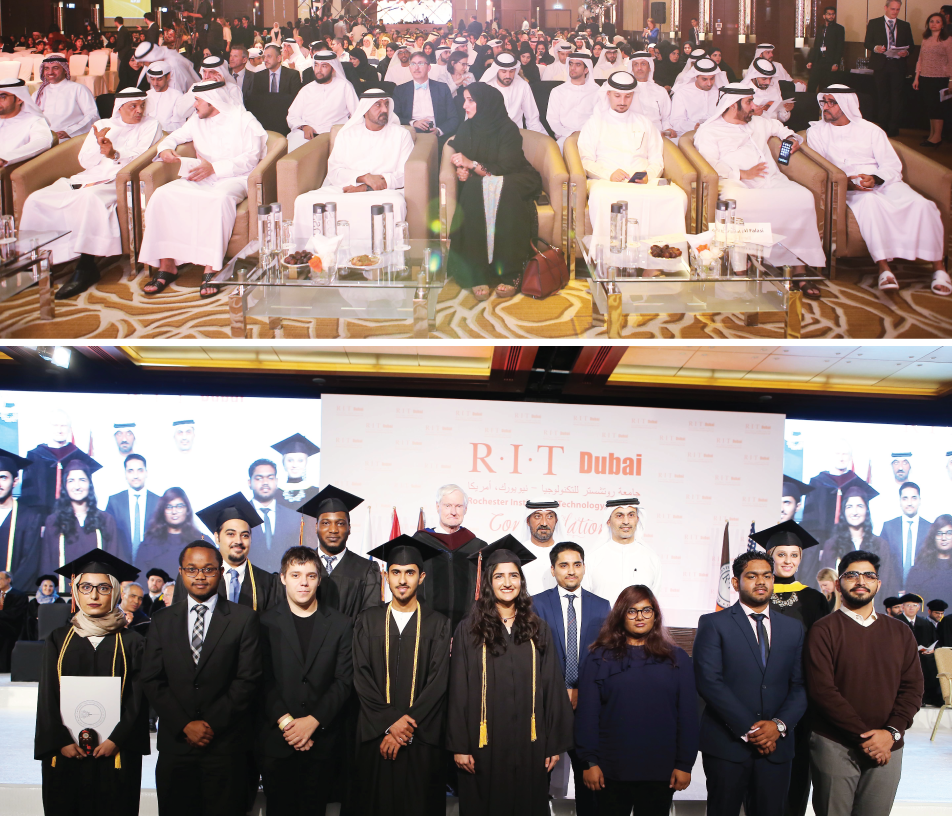