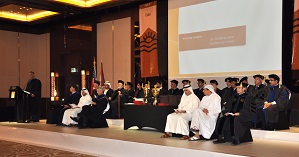 Established in 2008, RIT Dubai is a not-for-profit global campus of the esteemed Rochester Institute of Technology in New York, one of the world’s leading technology focused universities with a storied 185 year history.  RIT Dubai offers bachelors and master’s degrees in business and leadership, engineering, and computing.

Among the honored speakers at the RIT Dubai commencement was H.E. Sheikh Khalid bin Zayed Al Nahyan. He congratulated the graduating students and highlighted the importance of the journey itself, as opposed to achieving the various career milestones.

Dr. Yousef stated, “We at RIT Dubai are committed to being unique. We do not believe in simply giving students some books, some tests, and then handing out their diplomas. We believe in focusing our energy on engagement, interaction with the community, and creating relationships with local industries.” 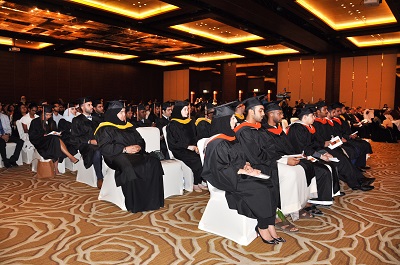 In 2014, His Highness Sheikh Mohammed bin Rashid Al Maktoum, Vice-President and Prime Minister of the UAE and Ruler of Dubai, created a platform to transform Dubai into a 'Smart City'. It is his vision to change the way of life in Dubai, and RIT Dubai was the first university to immediately respond to his call by creating a professional diploma in Smart City and the first batch of participants received their professional diplomas during the ceremony after 6 months of course work.

This diploma is a sign of the innovation that is part of the culture at RIT Dubai. The University is also starting a truly innovative Master program in City Science this upcoming fall. This means that RIT Dubai became the first international campus to propose, build, and market a program that met the specific needs of its host city and then have that program accepted by its main campus. Dr. Yousef thanked Dubai Silicon Oasis Authority for giving RIT Dubai the chance to create such program. He especially mentioned Dr. Mohamed Al Zarooni, Vice Chairman and CEO of DSOA, for sponsoring RIT Dubai faculty and research in Smart City, Sustainability, and Islamic Digital Finance, who had one of his sons, Abdulaziz Al Zarooni, graduating as a bachelor in Marketing during the ceremony.

The University also had also celebrated with the participants of the “Sustainability Workshop Series”. A program that was created with the main campus in New York and the famous RIT Golisano Institute for Sustainability. The program was created and tailored for the UAE Ministry of Public Works.

H.E. Mohammed Sharaf – Group CEO, DP World was asked to give the commencement speech this year. He stated, “I wanted to select a different topic for my speech today – for me it is all about attitude.” He elaborated on this by saying “In this environment of global competition and unstable economy we need to have a certain attitude that can create an environment of collaborate innovation in order to succeed.” He went on to say, that he believed that RIT Dubai graduates were well equipped to take on those new challenges.  He stated that when he himself graduated he never imagined he would take on such a distinguished position at DP World but “If you can dream it, you can do it.”

Mr. Rob Waller, U.S. Consul General of Dubai, joined RIT Dubai again for the ceremony this year. He has served as the United States Consul General to Dubai since July of 2012, and he will be leaving this post this summer.

Dr. Jeremy Haefner, Provost and Senior VP for Academic Affairs from the main campus in New York reminder RIT Dubai graduates that there are now part of a network of over 120.000 Alumni from all RIT campuses all over the world.

The graduate address was delivered by Fouzana Feroze who also won this year’s Valedictorian Cup. She reminisced about her first day at RIT Dubai and how welcoming the city of Dubai and RIT Dubai was when she first arrived. Fouzana also stated that she now feels ready to face all challenges that await her the competitive work environment worldwide.

Established in 2008, RIT Dubai is a not-for-profit global campus of the esteemed Rochester Institute of Technology in New York, one of the world’s leading technological-focused universities with a storied 185 year history.

RIT Dubai offers American degrees, and all of RIT’s programs are UAE accredited. Students of RIT Dubai also have the unique opportunity to choose to study abroad at the main campus in New York or at one of its other global campuses

Excellence in education is RIT Dubai’s highest priority, with a competitive and selective admission process to ensure an engaged and diverse student body. The faculty consists of outstanding professors from the United States, the Middle East, and around the world.

RIT Dubai is located in Dubai Silicon Oasis, a technology park with over 900 companies such as SAP, Henkel, Schneider Electric, Fujitsu, and Axiom.