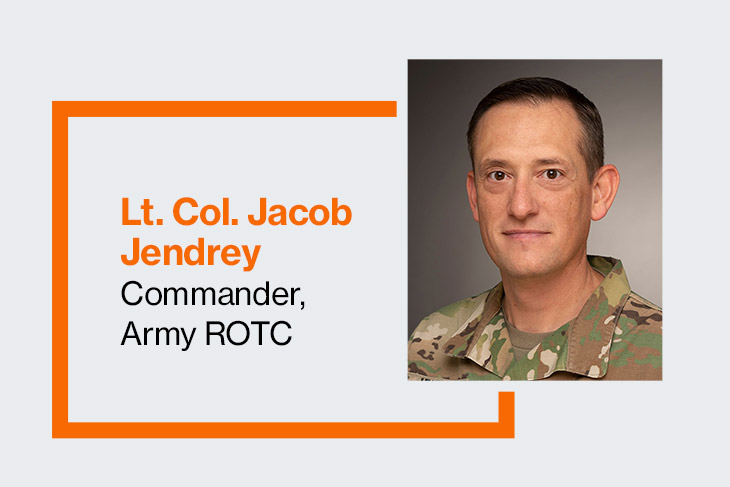 Lt. Col. Jacob Jendrey assumed command of RIT’s Army ROTC program this summer and leads the detachment that has been part of the campus for more than 50 years.

After having served for more than 20 years at home and abroad as an intelligence officer in the U.S. Army, Lt. Col. Jacob Jendrey was named the new commander of RIT’s Army ROTC program. He began with the campus group this summer and brings experience as a former cadet and a career officer who has seen history unfold in America and across the globe.

“The Army was the door to my education. I came from a pretty humble family background and money for school was important to me. I attended a small community college near where I grew up and then transitioned to a four-year university, enlisted, and immediately fell in love with the Army and knew that was what I wanted to do as a profession and as a career,” said Jendrey, who began his Army career as an ROTC cadet, attending Old Dominion University in his home state of Virginia.

He enlisted in the Army National Guard in 2000. Little did he know that the next several years would be a whirlwind of personal and professional changes. He’d meet the woman who would become his wife in Army ROTC, and after the two married, he became a father.

“I had had to pause my college when 9/11 happened because the reserve unit that I was working with was called up to defend Washington, D.C.,” said Jendrey. He would later become a commissioned officer and serve as a company commander, brigade operations officer, and in military intelligence as the U.S. engaged in conflicts in Iraq and Afghanistan.

“I haven’t had a typical career—I spent three years in El Paso, Texas, testing new army equipment, particularly intelligence equipment. I had an amazing staff—amazing scientists we worked with,” said Jendrey, who also worked at NATO’s headquarters in Belgium. “I left Texas and went to Europe, to Germany, and I was the operations officer for our intelligence brigade in Europe. This was about the time Russia annexed Crimea. We got to see the evolution of Europe, of NATO as an alliance, and how important our partners across the ocean are.”

The ability to bridge communities and create meaningful relationships is integral to the development of new leaders, said Jendrey. And part of his focus for his ROTC detachment is to provide opportunities for the cadets to integrate academic skills in areas key to safeguarding the U.S. today—even if one of their assignments is in Europe or Asia.

“Having Italian, Turkish, and Norwegian bosses while working shoulder-to-shoulder with colleagues from different cultures, with different ways of doing business, was a humbling experience. Learning how to live and operate in a foreign culture, while navigating in their language and adopting their behavioral norms, was huge. It was a really a fascinating time,” said Jendrey.

That fascination is something Jendrey would like to instill in the Army’s newest cadets. He’d also like to dispel some of the stereotypes people often have about the Army and its personnel.

“I’m here to tell you I’ve worked with more scientists than I have tank drivers in my career,” he said. “And as our Army evolves, to address the challenges of a complex and changing world, we will need even more leaders who are comfortable developing and employing advanced technologies to protect our way of life.

“More of our conflicts are taking place in cyberspace. We need people who have a whole range of skills. You can’t be just one thing anymore. If you like the challenge of being put in charge of peers and figuring out how to apply your technical knowledge against complex, real-world problems, the RIT Army ROTC program might be the place for you.”