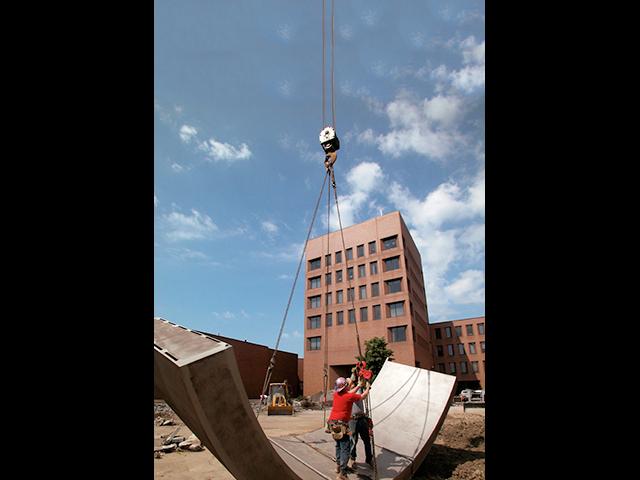 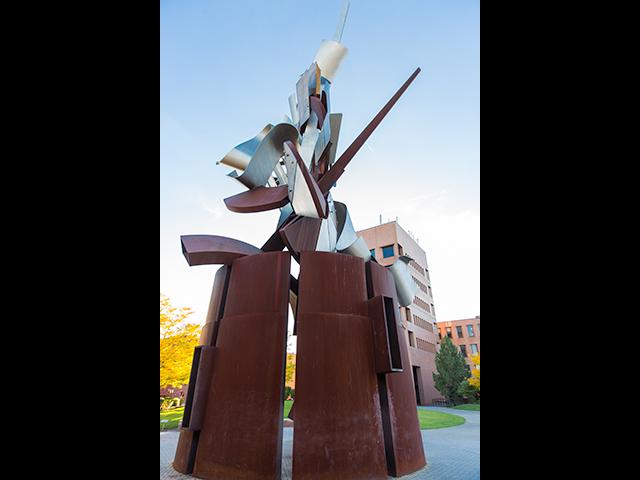 RIT’s fascination with art began within the first year of The Mechanics Institute being founded. As Fine Arts classes like freehand drawing, architectural drawing and design were added and departments such as Graphic Arts, Fine Arts, and School for American Crafts are established, RIT began to expand and develop its sharp eye for enhancing and adorning the campus’s space and walls.

The legacy of our most important art enthusiast and commissioner, Susan Bevier, ignited an interest within the Board of Trustees. They dedicated a fund with the purpose of installing art that resonates with meaning and gives life and character to RIT’s bland brick surroundings. After our move to Henrietta we have slowly obtained staple pieces that separate us from any other institute in the U.S. It took us a few years to figure out what to place at the center of campus, but in 2003 we finally opted for a 110 ton 73 feet tall, stainless steel and bronze sculpture. The piece is so grand that it achieved the title of the largest sculpture on any American university campus!  "The Sentinel" as it was named, was created by RIT's Charlotte Fredericks Endowed Mowris Chair in the School for American Crafts, Albert Paley. Paley's work is held by museums all over the world, including the Metropolitan Museum of Art in New York, the Museum of Fine Arts in Boston, the Museum of Fine Arts in Houston, and the Victoria and Albert Museum in London. He has over 50 commissioned pieces across the nation and is one of the most sought after metal sculptors in the United States.

As for the meaning of the sculpture? Art is subjective, but it is said that the blend of materials and shapes like straight lines and curves represent the unique blend of what RIT’s mission is. It speaks for the cross disciplines such as art and technology and how in the end as much as they are different, together they become one. What do you think? It is safe to say that everyone that has come across it has a different interpretation, something that makes this piece quite remarkable!