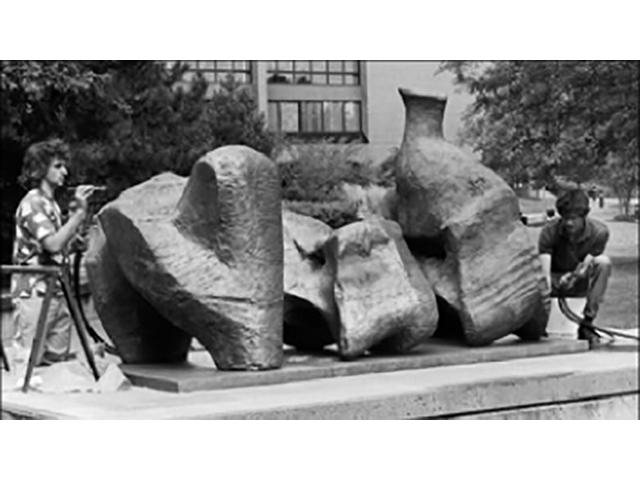 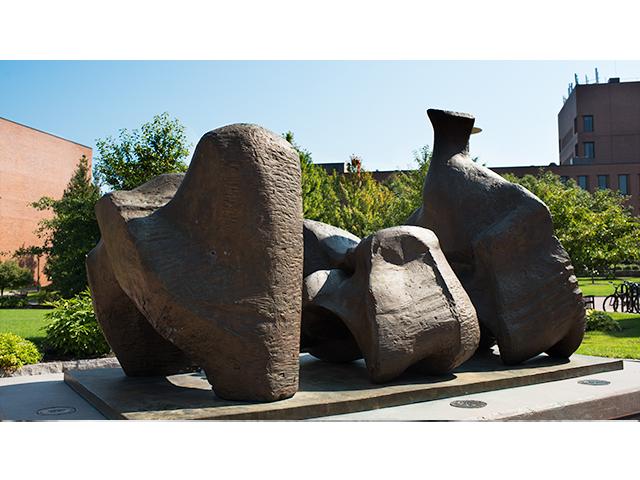 RIT’s campus may be known by many for its simple orange brick buildings, but it also displays serious taste in art given the overwhelming amount of paintings, sculptures, furniture, and pictures present on campus. Interestingly enough, 1 percent of the budget to move to Henrietta in 1968 was specifically designated to adorn the campus with fine art.

This #ThrowbackThursday we want to give a shoutout to the Three Piece Reclining Figure No. 1 by Henry Moore that is displayed in the Eastman Quad between both the College of Liberal Arts and Gannett building. Yet, you may have noticed from last week's Throwback post that the location hasn’t been entirely consistent since its placement at RIT. This piece was purchased right after the move in 1968 but dates all the way back to 1962. It was originally placed in front of Max Lowenthal Hall and just recently it was relocated to the back lawn of Liberal Arts Hall.

The sculpture is made entirely out of bronze, and recently a similar sculpture made by the very same Henry More was sold at an auction in 2015 for $2.89 million. Five of his seven major sculptures similar to this one are displayed at major art museums around the country and Europe. Andrew Baxter, the artist shown in the picture on the left who restored the piece in 1998, said "This sculpture is almost expressionistic in its modeling, fairly unique for Moore's work, and an important piece of art."

If you are interested in articles like these that talk and expose valuable information about the timeless pieces that RIT has collected over the decades, be sure to check out the Art on Campus segment that the RIT libraries has gathered for your convenience! They have all of the collections including the Bevier Collection, Cary Collection, Deaf Art Collection, NTID Dyer Art Center, Public Art on Campus Collection and many more.