10 Reasons to Check Out the New Gracie’s

10 Reasons to Check Out the New Gracie’s 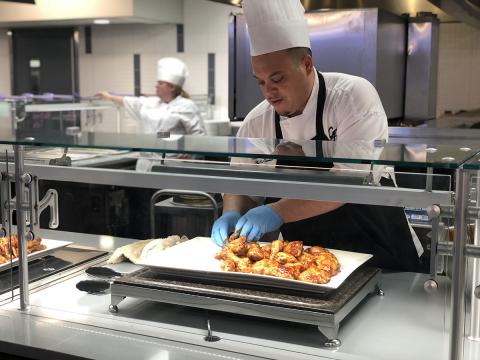 Gracie’s recently completed a $2 million renovation of the kitchen and serving area including new equipment, an open layout, and updated aesthetic but there’s more changes than just a fresh look! Check out ten reasons to check out the new Gracie’s.

If you didn’t see it already, we used a crane to lift in our 5,200 lb. stone pizza oven. The oven cooks pizzas at 800 degrees in a speedy 90 seconds and produces a bubbly, crispy crust. Pizza creations you’ll find on the menu include Meat Lovers, Spinach Ricotta, Indian, and the Chicken Alfredo pizzas.

Chef Daniel Morales uses innovative combi ovens that combine both dry heat and steam to maintain exact humidity levels of all the meat on the Carving Station. He can control the moisture levels in his food right from his phone. Available during dinner only, you’ll find dinners like Braised Beef Tips and Shrimp, Roasted Prime Rib, Barbecue Brisket, BBQ Chicken, and Honey Roasted Ham.

LED lights. Glass line dividers. Walls removed and stations rearranged. Easier access to silverware. A new entrance to the dish return so you don’t have to navigate past the cereal and around the bend (upperclassmen know). It’s just...way better.

The new Action Station brings six new menus to Gracie’s! Many of these new menus were favorites from special events last year that made it to the permanent menu. Check out these Build Your Own entrée bars: Ramen, Burrito, Fried Rice, Bruschetta, Omelet, and Pasta.

That aroma of fresh baked cookies wafting through the air that reminds you of home… that’s the new oven behind the dessert area where cookies are baked fresh and served right to you. Gracie’s Chef Grace McQueen just joined the team and already has created some delicious new desserts.

8. Visiting Chefs - an oldie but a goodie!

It’s not new news that Gracie’s has Visiting Chefs, but we have to remind you that you can have all-you-care-to-eat of Hissho Sushi, Pakistan House, Royal of India, and Tandoor of India. Just check the menus at dining.rit.edu to see if your favorite Visiting Chef is there.

We heard that the 7:30 p.m. closing time didn’t work for student schedules, so we moved it back. Gracie’s now closes at 8 p.m. Monday through Friday. Gracie’s is also only open for brunch and dinner on Saturday and Sunday. View the new hours here.

Did you know that Gracie’s got a new head chef in in Summer of 2017? If you haven’t been to Gracie’s since then, we challenge you to check out the changes Chef Daniel has made. He has transitioned to recipes from scratch and cooking with fresh produce. Changes you’ll find include homemade soups, food sourced locally, more recipes made from scratch, and formerly frozen produce and seafood switched to fresh.

The seating area will be renovated in Summer of 2020. You’ll see updates to furniture and décor including smaller tables that can be pushed together for larger groups. Have you seen something you like that would be a good fit for Gracie’s seating area? Let us know!