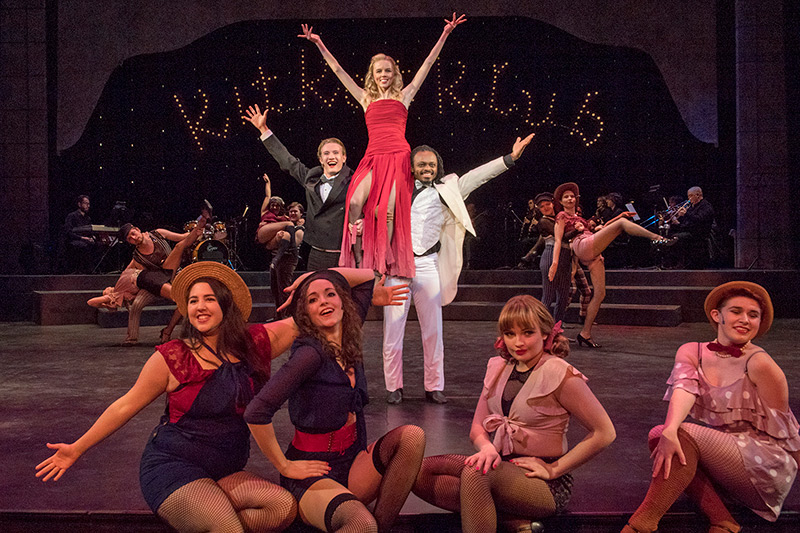 Deaf and hearing actors and dancers from RIT/NTID Performing Arts and RIT’s College of Liberal Arts performed Cabaret in American Sign Language and spoken English during the 2018 theatrical season.

Mystery, murder, dance, a look at deaf life, and the struggle to survive Nazi Germany are all part of a new collaborative season by Rochester Institute of Technology’s National Technical Institute for the Deaf Performing Arts program and College of Liberal Arts Theater Arts program.

The productions present a wide array of cultural, political and social issues. The 2019-2020 season includes:

I and You, written by Lauren Gunderson and directed by Andy Head, Oct. 25-27, 1510 Lab Theatre, Lyndon Baines Johnson Hall. Two students are brought together through a mundane poetry project involving Walt Whitman’s Leaves of Grass. As the two let down their guards and share their secrets, the project unlocks a much deeper mystery.

Text M for Murder, written by Frederick Knott and directed by Luane Davis-Haggerty, Feb. 28-March 1, 2020, in 1510 Lab Theatre. Tony Wendice thinks he has arranged the perfect murder. Unfortunately, the murderer gets murdered and the intended victim survives. Through a series of unlucky twists and turns, and with the help of a secret lover and an inspector from Scotland Yard, the truth is uncovered, a trap is set, and Tony admits his guilt.

Bent, written by Martin Sherman and directed by Matthew Nicosia, March 27-29, 2020, in Booth Black Box theater. In 1934 Berlin on the eve of the Nazi incursion, Max and his lover Rudy are recovering from a night of debauchery with a German stormtrooper. Two soldiers burst into their apartment beginning a nightmare odyssey through Nazi Germany. Eventually taken to a death camp at Dachau, Max is branded with the “pink triangle,” a mark of persecution and discrimination the Nazis used to identify homosexuals, but clings to his hope for survival.

Dance: The Rhythm of Motion and Light, conceived and directed by Thomas Warfield, April 17-19, 2020, in Panara Theatre. This multi-arts, multi-experiential dance performance uses innovative collaborations with technology, such as augmented reality, and live music. The choreography is created from the technology itself, and the show promises to be a spectacle of color, light, movement and music.

All five productions are planned to be fully accessible for deaf, hard-of-hearing and hearing audiences, whether using captions, American Sign Language in the performance, interpreters or a combination. Bent is not appropriate for children under 12.

Tickets will be available through www.rittickets.com, by phone at 585-475-4121 or at the door two hours prior to curtain time. For more information, go to https://www.rit.edu/cla/finearts/theatrearts/cla-ntid-19-20-theatrical-season