Rules for Selection of Articles

The following chart sets out the general rules that cover article usage in English: 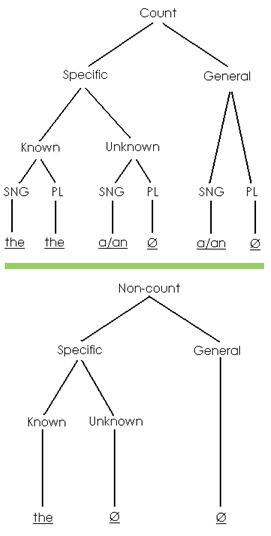 Use of the Article the

The assignment on page 4 is due Monday.

I read the e-mails you sent me yesterday.

It snowed yesterday. The snow was light and fluffy.

In all of the above examples, use of the article the signals that the writer expects the reader to know which assignment, which e-mails, and which snow he or she is writing about.

Use of the Article a (an)

Use a (an) to mean "one"--where many are possible. The article a (an) is used only with count, singular nouns. The noun may be specific or general, but if it is specific, the reader should not know which one you are talking about.

My dad runs a company in Rochester.

A company usually has to pay taxes to the government.

Use of the Article Ø

Ø, that is, no article at all, is used to mean "all" or "some." Ø is used only with count, plural nouns and non-count nouns. The noun may be specific or general but, if it is specific, the reader should not know exactly what you are talking about.

My daughter got Ø good grades this semester.

Some instructors never give Ø high grades.

We added Ø sodium to chlorine in the laboratory today.

Ø Sodium should be avoided by people with high blood pressure.