After students have read an assigned reading, ask them to form small groups and identify several words they would like to learn more about. (Teachers can choose a specific number of words depending on class size.) When all the groups have chosen their words, write them on the board with the corresponding page and paragraph numbers from the text.

Ask the groups to do the following for each word they have chosen:

Discuss how the word is used in the text.

Define the word using contextual clues and other resources.

Discuss why they think the word is important to learn.

When all groups are finished, ask each group to present the results of their discussion. The instructor can write the definitions on the board and other class members can contribute their ideas. Students later record all of the definitions in their notebooks for further practice and review.

The teacher now has a list of student-generated words for use in follow-up activities. Modeling how this process is done will help guide students in their discussions and presentations.

Concept circles (Vacca & Vacca, 1996) serve the same function as categorization activities, but they seem to be more fun for students. Here are three examples of variations on the concept circle. For each concept circle, draw a circle and divide it into quadrants.

1. Put words or phrases in each section of the circle, and direct students to describe or name the concept relationship shown in the sections. 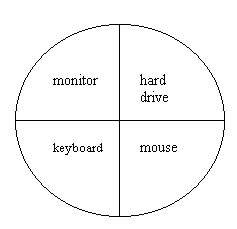 For this example, the concept to be entered in the blank would be "computer."

2. Put words or phrases in each section of a concept circle and direct students to shade in a section containing a word or phrase that does not relate to the others in the circle. Then ask them to identify the overarching concept.

3. Leave one or two sections of a concpet circle blank and ask students to fill in the section(s) with a word that relates to the terms in the other sections. They then identify the overarching concept represented by the circle.

"CD instruction supports vocabulary and concept learning by helping students to internalize a strategy for defining and clarifying the meaning of unknown words. The hierarchical structure of a concept has an organizational pattern that is reflected by the general structure of a CD word map" (Vacca & Vacca, 1996, p. 149).

In the center of the CD word map, students write the concept being studied.

Working outward, they then write the word which best describes the general class or superordinate concept that includes the target concept. (What is it?)

Students then provide at least three examples of the concept as well as three properties. (What are some examples? What is it like?)

Comparison of the target concept is also possible when students think of an additional concept that belongs to the general class but is different from the concept being studied.

See the diagram below for a CD word map. 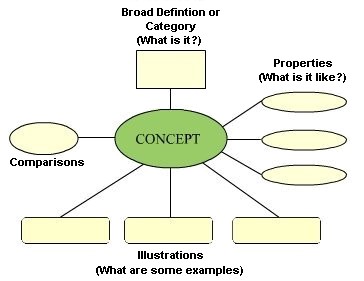 The goal of CD mapping is not for students to have a pile of maps for each vocabulary list they need to study. Instead, students need to see and understand how the process works so they can internalize it and apply it as needed.