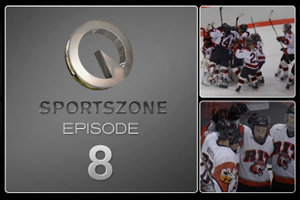 This episode of RIT SportsZone follows the RIT Women’s Hockey team to the NCAA Division 3 National Championship game. SportsZone’s John DiTullio and Kristen Klock bring you highlights and reaction from one of the biggest moments in women’s hockey history.

Plus, just days after the RIT Men’s Hockey season ended, SportsZone catches up with one Tiger who was lured from the Brick City to the Pro’s.