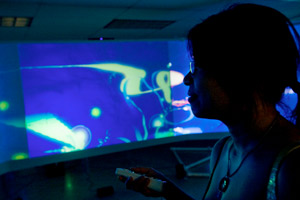 Festivalgoers ate ice cream dished out using alternative energy. They played with motion control technology to explore the solar system. Some sat for a 3D portrait shoot, while others lined up to catch a glimpse of the workplace in 2020. And there was even a chance to chat with RIT students stationed across the globe.

For the fourth consecutive year, RIT played host to Imagine RIT: Innovation and Creativity Festival. This was no ordinary festival for the crowd of nearly 32,000 who immersed themselves in 350 exhibits that spanned the nation’s 15th largest private university.

“Imagine RIT always has something for everyone,” says RIT President Bill Destler. “The collision of our left-brain assets in science, technology and entrepreneurship with our right-brain proficiency in the creative and design arts provides a dazzling spectacle that highlights the reasons this university is truly unique.”

The festival, with Time Warner Cable serving as the premier sponsor, involved 2,700 exhibitors and more than 600 volunteers. More than 60 percent of the exhibits were new, while there were major variations to popular exhibits from the past. In true RIT fashion, each of the exhibits displayed a custom QR code (quick response barcode), that when scanned by a smart phone, directed visitors to the mobile version of the festival site where they could learn more and plan out seeing other exhibits.

In addition, Imagine RIT featured a variety of food, entertainment and plenty of children’s activities that ensured a fun, family-friendly environment.

Yet it’s the festival’s interaction and experience that draws the large crowds. Whether it’s stepping into a 3D Time machine or playing augmented reality golf.

Want to relive the festival? Visitors were also able to participate in a new form of journalism, titled “Rise Above the Crowd.” Here, visitors sent pictures and videos, tweets and texts from their mobile devices. Now individuals may revisit the accumulated catalog of media. Visit http://rise.rit.edu to learn more.

“It was another amazing day for RIT and the Greater Rochester region,” says Imagine RIT Chairman Barry Culhane. “It was great to have so many community members, especially children, teens, parents and RIT alumni, join us and see all of the innovative and creative talents that exist on the RIT campus. The festival has established itself as both an RIT and Rochester ‘must-experience’ event.”