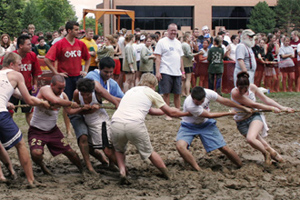 Every September, RIT students get a little dirty. But it’s all in good fun, for good reason. The annual Mud Tug, hosted by Phi Kappa Psi fraternity and Zeta Tau Alpha sorority, pits student teams from fraternities and sororities, residence halls, and campus organizations against one another in a tug-of-war competition. The winners celebrate. The losers take a mud bath.

“Over the past 14 years, Mud Tug has truly become an RIT tradition that students look forward to participating in,” says Bryan DiCarlo, president of Phi Kappa Psi. “One aspect of the event which often goes unnoticed is that the event’s proceeds are always donated to a charity in need.”

Mud Tug donates proceeds to various organizations. In the past the Susan G. Komen Breast Cancer Foundation and Breast Cancer Education and Awareness have been recipients. This year’s beneficiary is Fisher House, an organization that supports injured military members and their families.

“We wanted a way to help support our troops, and Fisher House is a really great charity,” says DiCarlo.