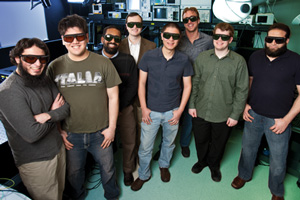 For more than half a century, progress in the production of silicon-based electronic components has made possible smaller, more powerful, more reliable, and cheaper products. But conventional microelectronic technology is beginning to reach its limits. Companies and academic researchers believe photonics will light the way to the next generation of microprocessor, communication, and sensing systems.

Nothing is faster than the speed of light. "That's really what it comes down to," says Stefan F. Preble, assistant professor of microsystems engineering in RIT's Kate Gleason College of Engineering and leader of RIT's Nanophotonics Group. "Current computer technology is limited by how quickly electrons can move. So there's definitely a motivation to use light for dealing with information."

Preble's group is developing ultra-small devices and systems that leverage the high bandwidth, low power, low latency, and sensitivity that are possible with light. They are focusing on integrating nanophotonic devices on a silicon CMOS platform in order to take advantage of the advanced fabrication techniques used in the microelectronics industry. The goal is to directly integrate photonics with current electronic devices.

Although the tremendous potential of nanophotonics has generated much interest, development of the technology for practical use in computers and other products is in the very early stages. "Right now we're really in the prehistorics of what we can do with photonics. At this point, it's possible only to have on order of maybe 1,000 components integrated on a chip," says Preble. "We're trying to develop the technologies, the architectures to scale that up to millions, so that eventually we could have these incredibly powerful computers."

A key to realizing this goal is developing technologies to control the characteristics of light. The basic building block for this is known as the ring resonator. "It is the photonic equivalent of the electronic transistor. While it will likely never replace the electronic transistor, it enables us to process information at the speed and bandwidths of light," says Preble. "With these ring resonators, we can directly turn the light on and off, which allows digital information (in the form of ones and zeros) to be transmitted."

However, ring resonators can do much more, Preble says. "We need to be able to manipulate the speed, frequency, and direction of light."

Preble's work is supported by two of the U.S. Defense Department's most prestigious honors, the Defense Advanced Research Projects Agency (DARPA) Young Faculty Award and the Air Force Office of Scientific Research (AFSOR) Young Investigators Research Program Award. He has also received funding from the National Science Foundation, the Semiconductor Research Corporation, and from RIT. Preble, who joined the RIT faculty in 2007, received MS and Ph.D. degrees from Cornell University and a BS in electrical engineering from RIT (2002).

"Dr. Preble is one of the top young researchers in the country working in the "elds of nanophotonics and microsystems," says Bruce Smith, professor and director of the RIT microsystems engineering program. "His accomplishments in these highly competitive and prestigious programs bears this out."