Tunnels tell stories of the times 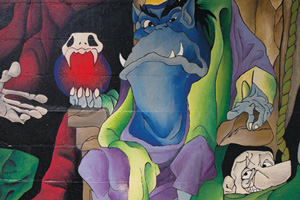 If the walls of the tunnels underneath the residence halls could talk, they would tell you a story—a story that connects generations of RIT students to each other and to the social issues of the time.

For nearly 30 years, the brick and mortar walls of the expansive underground tunnel system have provided students with a canvas to not only chronicle RIT’s history, but the important social, cultural and historical moments that have shaped each generation that has traveled these pathways.

The genesis of painting murals in the tunnels began in 1980, when a contest encouraged some 20 students to create original artwork along the tunnel walls, which connect the university’s residence halls.

Susan Robison Zulauf ’83 (graphic design) was among the first group of student-artists to lend its imagination to the tunnel walls.

“The tunnels were all blank and the contest gave us the opportunity to be creative and to brighten up the walls,” says Zulauf, who hand-painted an image of J.R.R. Tolkien’s literary classic The Hobbit. “It was kind of a big deal. There were maybe 20 to 25 students involved in the contest every year.” 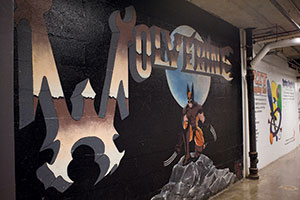 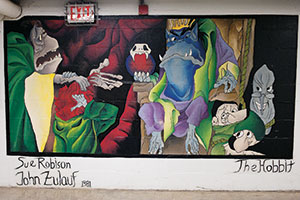 Susan Robison Zulauf ’83 (graphic design) designed and painted The Hobbit after falling in love with the literary classic. She worked on the mural with John Zulauf ’81 (hotel/hospitality), her then-boyfriend and now husband. 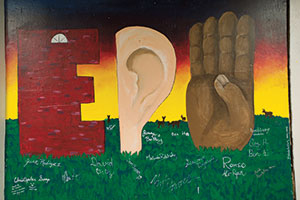 The resident advisors of the Ellingson, Peterson and Bell residence halls painted the mural in 2005. 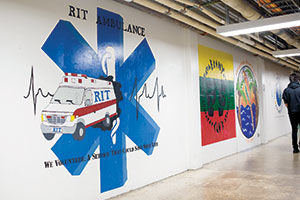 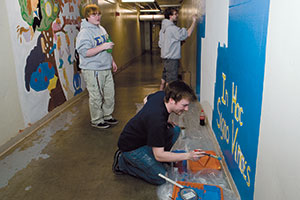 Over the years, students have painted murals that have captured the culturally relevant (U2, The Who), the creatively evocative (The Simpsons, Calvin and Hobbes) and the historically significant (the 50th anniversary of World War II, the Challenger explosion). Some murals have lasted the test of time with many from the ’70s and ’80s still standing today. Zulauf’s mural is among them.

“I came back to campus with my children and I couldn’t believe it was still there. I was amazed that after all these years no one ever painted over it,” says Zulauf, who began her career as an artist with Hallmark.

These days she works out of her studio in Ridgewood, N.J., licensing original paintings to more than 50 manufacturers through her company, Zulauf Designs. Clients, including Hallmark and Macy’s, use her designs for china patterns, holiday collectibles, fine art prints and paper products. The Hobbit was one of Zulauf’s original works of art.

Under the residence halls there are spaces of all kinds: eateries, laundry facilities, game rooms, stores and student organization offices—all of which are spread over 17 buildings and connected by an intricate web of tunnels. The murals were originally painted at random. They were, and still are, a way for students to express themselves.

Brittany Wooten ’07 (advertising photography) recalls working with her fellow resident advisors in 2005 on a mural representing the Ellingson, Peterson and Bell residence halls, an area known for its multicultural hearing, deaf and hard-of-hearing residents.

“Unique to our area, we were bringing cultures together,” she says of the diverse population of the three residence halls. The EPB mural was painted to reflect the spirit and diversity of the halls’ residents. “There was a lot of pride, culture and enthusiasm around our area, what we represented and what we brought together.”

Today, the addition of new murals is a well-organized activity run by the Residence Halls Association, a student-run council. Any individual student or student group can propose a mural to a student-led mural committee, which reviews an artist sketch of the proposed design and renders a decision.

Once approved, RHA assigns wall space and provides paint and materials. To ensure a sense of legacy, older murals are maintained as is, unless they have been defaced with graffiti or damaged by water or age. In those cases, murals are either retouched or painted over if they are beyond restoration. About a dozen new murals are painted each year.

“If you look at the different murals, there’s a whole history. It’s interesting to see how the times have changed, but also the things that have stayed constant throughout the years,” says Chelsea Metzger, a third-year advertising and public relations major who serves as the public relations chairman for Alpha Sigma Alpha sorority. ASA members recently painted their insignia in the tunnels. “We really wanted to put a mural together to represent (our sorority).”

Brendan Larrabee, a fifth-year engineering major and former president of the Sigma Chi Omega fraternity, agrees. He and his fraternity brothers painted a mural of their crest.

“To be a part of the history in these tunnels, to have that kind of impact and long-lasting effect is something that we really want to have as a fraternity,” says Larrabee. “We hope to be around for decades and to have a mural still standing is a nice legacy for our members to share in.”

Wooten, who is completing a graduate degree in student administration at Seattle University, echoes this sentiment.

“I love traditions and legacies and the history of those that have been there before you,” she says. “The murals just bring that sense of community and ownership for RIT students.”