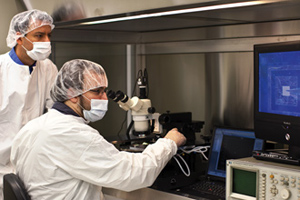 Imaging detectors are often the limiting factor for the most ambitious observations, across a broad range of applications. Some of the most demanding challenges require high-performance detectors.

Founded in 2006, the Rochester Imaging Detector Laboratory (RIDL) is making significant contributions to design, develop, and implement advanced sensor technologies. Under the leadership of Dr. Donald Figer, lab director and professor of imaging science, the lab has established key partnerships with University of Rochester, Lincoln Laboratory at Massachusetts Institute of Technology (MIT), Sandia National Laboratory, the Jet Propulsion Laboratory at California Institute of Technology (CalTech), NASA, and other leading laboratories in an effort to advance imaging sensor technology.

RIDL aims to operate within all ranges of the Technology Readiness Level (TRL) scale, from initial conceptualization to successful deployment. TRL was developed by the Department of Defense and is used by agencies to assess the maturity of emerging technologies. At the low end—one to three—research is in its initial stages, where the idea for an invention begins. On the other end—six to seven—technology has been developed and is being tested in relevant environments. When an application is successfully deployed in its intended environment, the technology is said to reach a TRL of nine—full maturity.

A quantum-limited imaging detector—that is the goal of the project sponsored by The Gordon and Betty Moore Foundation and in collaboration with Lincoln Laboratory. The novel detector will be able to detect individual photons, enabling the most sensitive observations from the world’s largest telescopes, including the Thirty Meter Telescope (TMT).

TMT is expected to be the first of a new generation of extremely large telescopes, with a 30-meter diameter segmented mirror capable of observations from the near ultraviolet to the mid-infrared. With the novel noiseless detector, the collecting power from TMT will be quadrupled for low-light level applications. Quantum-limited imaging detectors will also be useful for ground-based and space-based astrophysics, Earth and planetary remote sensing, exo-planet identification, biomedical imaging, homeland safety, and even consumer imaging applications.

Regardless of the type, noise is often the limiting factor among most detectors. Usually caused by the device itself, noise can restrict the ability to view the image, especially in low-light conditions. “By using a digital photon counter to detect every single photon—or unit of light—our device will have zero read noise,” says Figer. “A detector with zero read noise will dramatically reduce exposure times and increase the reach of the telescope.”

The design is based on Geiger-Mode Avalanche Photodiode (GM-APD) circuitry. The device retains the best properties found in state-of-the-art devices, while demonstrating a 256x256 silicon focal plane array. By 2010, the detector is scheduled to be ready for testing in relevant environments. “This is a prime example of where we are inventing new technologies that are advancing the field,” adds Figer.

For decades, we have been exploring life beyond Earth. The findings of these planetary missions often depend on the capability of deployed detectors. The challenge is long before the detectors reach their destination, the detectors must travel through harsh radiation environments filled with solar particles, Galactic cosmic rays, and trapped magnetospheric plasma. And once they meet their final destination, even harsher radiation may await—near Europa and the Jovian moons, for example.

To maximize the “science return” of future planetary missions, the next generation of imaging detectors need to be immune to radiation. Through a project sponsored by NASA, and in partnership with the University of Rochester, RIDL is developing one such detector.

Current detectors for planetary missions use advance forms of the basic Charge-Coupled Device (CCD) or Complementary Metal–Oxide–Semiconductor (CMOS) multiplexers. By taking advantage of the performance approach in CCD and the low-noise capability of the CMOS architecture, RIDL is merging proven technology to improve the performance and provide excellent noise properties of CCDs.

The technology of the device instantly converts electromagnetic signals into digital information, pixel by pixel, eliminating the ability for radiation to affect the signal. “With the instant conversion, radiation doesn’t have time to affect the signal. Once the data is digitized, it’s nearly impossible to pick up noise,” notes Figer.

To accurately assess the device’s immunity to radiation, the device will be tested in three relevant environments, including the particle beam at UC Davis Crocker Nuclear Laboratory. When successfully deployed, the radiation-tolerant detector will enable greater information gathering capabilities in future planetary missions.

A Solution for Sandia

Much of RIDL’s research and development focuses on detector technology, but the lab is also developing firmware and software applications to support these technologies.

Daniel Pontillo and John Frye, RIT computer engineering graduate students, are working with Sandia National Laboratories to develop hardware description language (HDL) software that is compatible with a specific infrared camera. The research students are investigating the feasibility of customizing a standard Field Programmable Gate Array (FPGA) chip to acquire data in a format compatible with the infrared camera in real-time.

“We have been able to implement a digital system within the FPGA that allows us to display the data on the computer,” says Frye. “The next step will be to develop the software. While the challenge is rather rudimentary, it has allowed me to apply my knowledge of detectors and has given me exposure to a national laboratory. That experience is unmatched.”

In just three years, RIDL has established a national reputation for helping to advance detector technology. “The applications are wide—from making new discoveries outside our planet to having a better view of the innermost parts of the body. It is our hope the technology we create here may help to address some of the world’s most pressing challenges,” adds Figer.