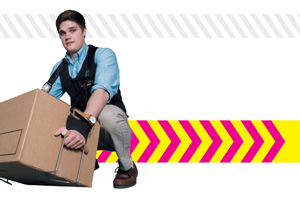 Sean Petterson and Justin Hillery noticed that construction workers building Global Village on campus last fall were struggling to lift large stones. And they had an idea.

“We were looking for problems we could fix,” says Petterson, a third-year industrial design major from Long Island who had met Hillery hours earlier in the gym. “That’s what we do for fun.” By the end of the school year, the students had not only invented Strong Arm—a vest that helps workers lift objects while lowering the risk of back injury—but were working on a patent.

Petterson and Hillery, a third-year multidisciplinary studies student from the Rochester area, have thrived in RIT’s multipart support system to foster entrepreneurship and new ideas—an innovation ecosystem so to speak—that in the last few years has matured into a booming network of resources.

The ecosystem includes the 2-year-old Center for Student Innovation, a hands-on place for students to tinker with ideas; a new rapid prototyping laboratory, where students can create physical models of their product; the Simone Center for Innovation and Entrepreneurship, which since 2007 has overseen entrepreneurial projects, programs and events on campus; and Venture Creations, a business incubator formed in 2003.

The days of vertically focused disciplines and job training for a certain job are over, says Lesa Mitchell, vice president of advancing innovation at the Ewing Marion Kauffman Foundation, the largest American foundation to focus on education and entrepreneurship.

“Universities must find new modes of teaching that will engage students, allow experiential learning and enable cross-disciplinary learning if they want to become and remain relevant,” says Mitchell, who spoke at RIT in May.

“We now have the assets in place to be as good, if not better, than any university in the country,” he says. The next step is maximizing those assets. 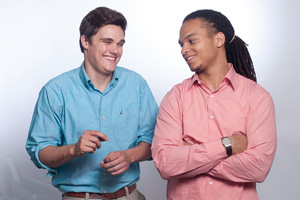 Producing a product
Once they had an idea, Petterson and Hillery were eager to make a prototype. They visited a hardware store, purchased supplies and began tinkering. A week later, Petterson walked into the Center for Student Innovation wearing a lifting vest made from tow straps for cars. He was carrying two 5-gallon water jugs weighing a total of 90 pounds.

“He said, ‘I’ve invented something,’ ” remembers Jon Schull, interim director of the center. “ ‘Now what do I do?’ ”

The Center for Student Innovation brings students from different disciplines together to work on projects they wouldn’t be able to do individually.

Inside the 10,000-square-foot circular glass structure, students get space and help connecting with other students in different fields and with experts inside and outside the university. The center also employs summer fellows and school-year fellows, who mentor students, work on projects for companies and organizations, and fiddle with their own inventions. Schull says the center is approaching $200,000 in grants and gifts.

Eliza Hammer, a third-year marketing student who grew up in Watertown, Conn., was the lead fellow this past school year and a summer fellow a year ago.

As a summer fellow, Hammer worked on a website for a clean energy company that allows customers to brag about how they reduced their home’s carbon footprint.

During the school year, Hammer helped design a hydroponic system using a polyvinyl chloride pipe. She loaned the system to The Harley School, a Rochester private school, so teachers could use it in the school’s garden. 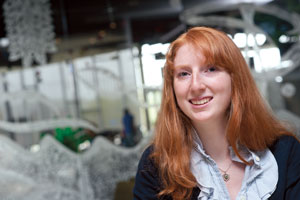 Student Eliza Hammer spends much of her free time at the Center for Student Innovation tinkering on her own projects and helping other students as a fellow.

Hammer says RIT students are fortunate to have facilities such as the Center for Student Innovation and the Rapid Prototyping Lab, which opened on an appointment basis last spring. Students use three-dimensional printers and a laser cutter/engraver in the lab to produce prototypes.

“This is tremendously valuable from an educational standpoint,” says Denis Cormier, professor of industrial and systems engineering in the Kate Gleason College of Engineering and chair of the lab’s planning committee. “This facility allows students to turn their ideas into reality.”

Petterson and Hillery used a sewing machine to produce their vest. They got mechanical and strategic advice from the center’s faculty leader, Carl Lundgren, and sewing and design help from other faculty and students in the center working on textiles.

“This kind of synergy is what we’re all about,” Schull says.

During the school year, the students met at the center as early as 8 a.m. and sometimes stayed until 2 a.m., most days only leaving to attend classes, eat and sleep. They toured local factories, consulted with faculty and students and learned everything they could about the mechanics of lifting. They even surveyed FedEx employees about what would make their jobs easier.

By the fourth quarter, after much research and field testing, they had designed nine prototypes.

“We were constantly trying to make it better,” Hillery says.

They reached a milestone in February when they captured second place in the RIT Shark Tank competition, which requires students to make a three-minute elevator pitch to a panel of business professionals similar to the television show. First place winners get $2,000. Petterson and Hillery won $1,000. 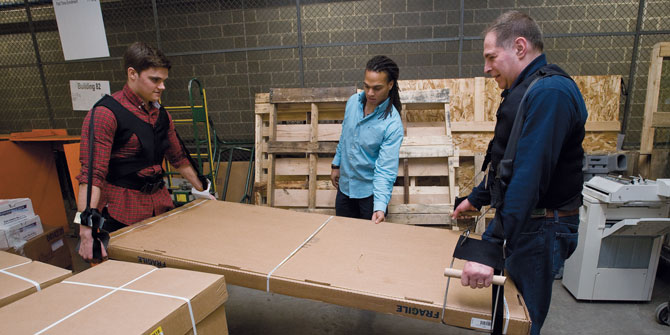 Students Sean Petterson, left, and Justin Hillery test their lifting vest with Steve Lipson, receiving assistant at Facilities Management Services. Petterson and Lipson are both wearing the vest and are lifting a 98-pound box. “I am happy to be the guinea pig,” says Lipson, who offered suggestions about how to improve the product.

Finding a market
Shark Tank is one of many events and programs sponsored by the Simone Center for Innovation and Entrepreneurship. Others include a business plan competition, designed to teach students how to get their ideas on paper; an entrepreneurial conference, which attracts hundreds of participants; RIT 48, a weekend event for students to develop a start-up company; Entrepreneurs Hall, a program where a cohort of students with different majors lives and takes classes together; and a student business incubator. Students who participate in Simone Center activities learn by doing, says founding director Richard DeMartino.

“My goal is to help them develop a team, understand the market potential and need and explore financial metrics and projections,” he says. “If all of these factors look promising, we build a prototype and begin to start a business.”

During a team meeting with six students developing an alarm clock for people who are deaf or hard-of-hearing, DeMartino asks for updates on the marketing plan. He questions how the design of the product is coming along, and he talks to the students about the cost to develop it.

Youmee Lee, a professional and technical communication major from Peoria, Ill., says she came up with the idea to develop the alarm clock earlier this year because the models on the market don’t use updated technology.

“I thought I could do better,” she says.

“We really want to be able to show that deaf people can succeed with this,” says Schneider.

DeMartino says they have already succeeded by forming a team, finding out whether there’s a market for their product and deciding how to move forward.

Brian Johnstone ’08 (software engineering) and Colin Doody ’07 (new media information technology) have experienced the different definitions of success. They turned to DeMartino in 2007 when as students they were working on a project to visualize the human body in 3-D and they wanted to protect their intellectual property.

“He gave us a push toward legitimizing things,” Johnstone says about incorporating the company.

The company has been successful, the men say, because they have worked hard and are flexible. 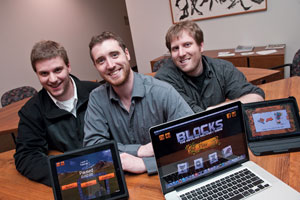 To pay the bills, Darkwind Media did Web development work for other companies and other odd jobs while working on their 3-D application on the side. Last year, they partnered with a company that produced a similar 3-D engine for making games and applications, instead of competing with them.

“Our number one priority was always staying alive,” Doody says.

They also are developing their game, Blocks, for mobile devices. With six full-time employees—five of whom are RIT graduates—and a fleet of contractors, they are on their way to becoming a full-time game studio.

Venture Creations, they say, continues to play a role in their success.

“Coming here as a student is great because it offers another level of legitimacy,” says Matt Mikuszewski ’07 (new media), who joined Darkwind in 2008.

That legitimacy included giving them office furniture, Internet access, a place to take clients and workspace next to others trying to get businesses off the ground.

Making a business
Bill Jones, interim director of Venture Creations, says since the incubator has been open, 21 companies have “graduated.” Cerion Energy, a company that specializes in burning diesel fuel more efficiently, left in 2007. Seven, including Cerion, exist today and have created more than 80 jobs.

Jones expects that number to grow now that Venture Creations is selecting more qualified companies, half of which are in the Clean Energy Incubator funded by the New York State Energy Research and Development Authority. And as RIT’s innovation ecosystem continues to develop, more businesses will be candidates.

In June, July and August, for example, 20 undergraduate and two graduate students, including Hillery, Petterson and the NTID alarm clock team, participated in the E. Philip Saunders Summer Start-Up pilot program at the Saunders College of Business, says Richard Notargiacomo, business development manager at Venture Creations. The students, who received stipends and housing as summer reseach and innovation fellows, worked on their business plans and attended weekly guest lectures. In the 11th week, they presented their plans to real investors.

“This will fill the gap between ideas and real businesses,” Notargiacomo says.

With downsizing and outsourcing by big corporations, Jones says, start-up businesses are critical because they are creating new jobs. RIT is positioned to develop a higher percentage of these entrepreneurial businesses than other colleges. Jeremy Haefner, senior vice president for academic affairs and provost, says this is particularly true locally, where higher education is now a predominant industry. “RIT is going to have an economic impact, going to have a social impact in the Rochester region,” Haefner says. “We believe the students are a huge component of that.”

The next step, DeMartino says, is getting more students involved in all pieces of the ecosystem.

Hillery and Petterson have already made an impact. In April, the students placed second in the health care category of the New York state Business Plan Competition. The undergraduates bested graduate students from across the state.

By the end of the summer, they hope to have their vest tested and certified by OSHA and the patent written. Their goal is to sell the rights to the product or find a licensing partner to add the product to its inventory.

Then they’ll move on to other business ventures. Hillery is working on a necktie company that will allow young men to express their individuality. Petterson is dabbling in real estate, modular bedroom furniture and military fatigues.

“We are going to keep turning out inventions and products,” says Petterson. “That’s why we came to RIT.” 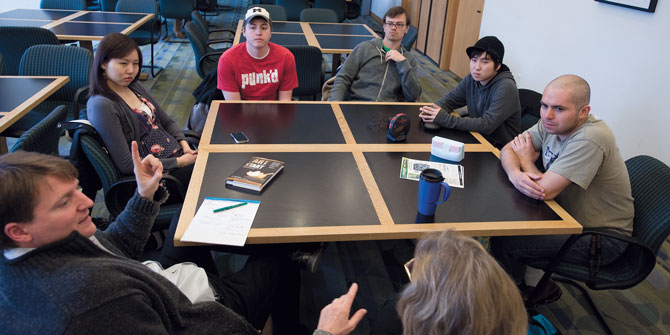 Simone Center Founding Director Richard DeMartino, bottom left, talks with students, from clockwise, Youmee Lee, Casey Schneider, Eli McDermott, Kevin Toh and Vincent Stowbunenko. They are developing an alarm clock for people who are deaf or hard-of-hearing. DeMartino says his goal is to help students develop a team, understand the market potential and need and explore financial metrics and projections.