Critical Research for a Soldier’s Safety 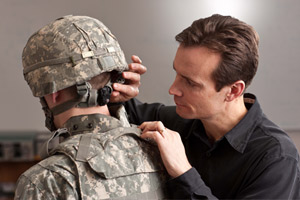 When a soldier is exposed to a blast, shockwaves can cause a series of complex mechanical and physical reactions in the brain. An RIT team, led by Professor David Borkholder, has engineered and tested a device that collects the data about a soldier’s exposure to explosive blasts. The blast gauge is attached to a soldier’s uniform or helmet and can be used to assist with field triage.

Traumatic brain injury is emerging as a significant challenge for veterans and is a reality of war. According to the Defense and Veterans Brain Injury Center established by Congress, 188,270 service members have suffered a traumatic brain injury in the last decade. The extent of injury is often difficult to discern, making diagnosis and selection of appropriate medical treatment challenging.

When a solider is exposed to a blast, shockwaves can cause a series of complex mechanical and physical reactions in the brain. These blast waves can induce tissue strains and stress, which may result in brain damage. Currently, no experimental data for humans exists to correlate pressure and stress on the brain with an actual explosive event that could assist with predicting brain injury.

Through an effort funded by the Defense Advance Research Projects Agency (DARPA), a team of RIT engineers has responded to this critical need by designing, engineering, and testing a blast measurement device that in the near future could be used to assist with field triage.

To learn more about the research, visit: http://www.rit.edu/research/biox_story.php?id=57