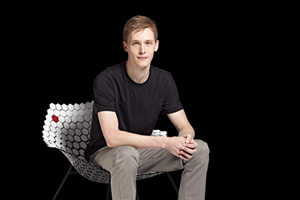 Less than a half hour into the start of the International Contemporary Furniture Fair in May, Rochester Institute of Technology student Dan Fritz received a surprising offer. A Norwegian art collector who runs high-end resort retreats all over the world offered to buy Fritz’s chair prototype. Fritz, an industrial design major from Clifton, Va., didn’t quite know what to say.

“He wanted to buy the original right off the floor,” says Fritz. “I told him I needed to think about it.”

Fritz ended up selling the chair to the art collector several months later.

“I used the first one as a prototype to make a second chair. I maintained the spacing of the original and refined the process based on what I learned.”

The response Fritz and five of his fellow RIT industrial design classmates received about their chair prototypes at the International Contemporary Furniture Fair (ICFF) exhibit in New York City was overwhelming.

“It’s the nicest exhibit done by a university I’ve ever seen,” says Sandra Bergmann, creative director of Richard Bergmann Architects. “We come to the fair every year. The student work of RIT is impressive.”

The ICFF, which ran May 14–17, is an annual event that attracts architects, manufacturers, buyers, designers and members of the media from all over the world. 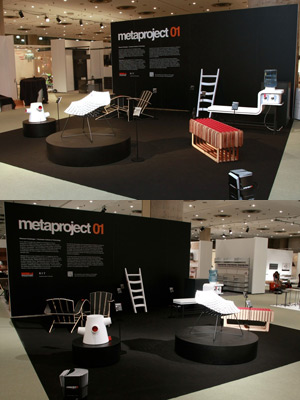 “It was a great pleasure to see the student work on display at the Javits Center during this year’s ICFF,” says Allan Chochinov, editor-in-chief of Core77.com. “The booth was one of the most well-designed, and the proud expressions on the students’ faces was all you needed to see.”

Once the fall quarter began, Owen revealed that the real name of the course was Metaproject 01 and that the students would have the opportunity to work with Wilsonart, a laminate manufacturer, to compete in a student design competition. Wilsonart has sponsored the competition over the past decade and collaborates with a different university each time.

For the competition, the students were to create seating prototypes using the Wilsonart laminate surfacing material. Wilsonart also required that each prototype be able to bear up to 400 pounds, must function as a seating device and the final prototype had to incorporate the company’s sample chip logo. The top designs would be on exhibit at the International Contemporary Furniture Fair.

After 20 weeks of research, brainstorming, sketching and fabricating, the students unveiled their final prototypes to a panel of design experts in February. The jury of experts were Grace Jeffers, design historian and project manager for Wilsonart; Alison DeMartino, director of marketing communications for Wilsonart; Chochinov, of Core77; Wendell Castle, furniture designer and RIT artist-in-residence; Belinda Lanks, managing editor of Metropolis magazine; and Ron Labaco, senior curator of the Museum of Arts and Design in New York City. After several hours of deliberations, the six jurors selected Fritz’s as the top design, followed by second place honors to Colleen MacKenzie.

Fritz’s chair is 280 individual laminate hexagons welded to 280 individual steel asterisks. Fritz got his design inspiration from the Womb Chair and the Bertoia Diamond Chair. He estimates he spent more than 200 hours building it. His chair was featured in the May 2011 issue of Metropolis magazine.

MacKenzie’s prototype is a bit of an optical illusion. At first glance it looks like a ladder, but it’s really a seat.

“This whole project has been a lot of fun,” says MacKenzie, of Weedsport, N.Y. “The fair is a great opportunity for publicizing my piece and getting my name out there and starting my career.”

Kestler took two Adirondack chairs and conjoined them. The chairs share one armrest so people face each other when sitting. Because digital technology has become such a primary source of communication for most people, Kestler wanted his design to promote face-to-face social interaction. Visitors to the fair enjoyed relaxing together in his chair.

Clark’s watercooler bench aims to promote those “watercooler” conversations in the workplace. He took a watercooler and retrofitted it into a bench. Clark says a manufacturer from Florida at the fair showed interest in his design.

“What was exciting with the student designs was the diversity of thinking and the excellence of execution,” says Wilsonart’s Jeffers. “When you go to a show like the International Contemporary Furniture Fair, you need to see pieces that inspire you, that make you think. I think the pieces from RIT did that for people. That’s really wonderful.”

Pezze designed an apparatus to make it easier for women to perform personal grooming like pedicures and leg shaving.

Kuo’s bench serves as a place for people to sit and chat and it can also store magazines and umbrellas.

“I couldn’t be more proud of the performance of these talented young designers,” says Josh Owen, associate professor of industrial design in RIT’s School of Design. “Despite the rigorous, real-world scope of the project, they behaved like consummate professionals at every turn. They delivered thoughtful research, were sensitive to the delicate balance of the client’s concerns and cooperated with each other, exercising great humility and civility. I will be delighted to welcome them as colleagues into the professional world after graduation!”

To watch a video of the students’ work at the International Contemporary Furniture Fair in New York City, go to www.youtube.com/watch?v=uBg4UnIIab4.

Since the beginning of the project, Scott Julian, a photojournalism major from Seattle, documented the students’ process. To see his video interviews with all 20 students and various RIT administrators, go to www.youtube.com/metaproject01.

Fritz graduated in May and landed a job at a furniture design company outside of Washington, D.C.