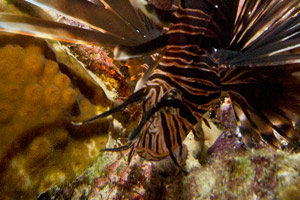 Lionfish are an invasive carnivore threatening marine life and diver safety in the waters off Bonaire, an island in the South Caribbean. In order to prevent the lionfish from destroying biodiversity in the coral reef ecosystem, researchers are locating, capturing and killing the fish.

In December 2010, a team of Rochester Institute of Technology students and instructors traveled to Bonaire, known for its diversity of marine life, to do a series of dives as part of a study-abroad program in advanced underwater photography and videography.

“I wanted to key in on the lionfish invasion as a specific underwater issue,” says Rene Piccarreto, an adjunct professor in RIT’s College of Imaging Arts and Sciences and member of the Professional Association of Diving Instructors, who led the underwater excursions.

Lionfish, native of the western Pacific Ocean, are known for their maroon and white striped bodies and their 13 venomous spines. Although beautiful and a big draw for aquariums, they are unappealing to sharks and other ocean predators of the Atlantic Ocean. Experts believe that the lionfish were released from aquariums in Florida during a hurricane in the 1990s.

Since 2006, the lionfish population has exploded along much of the U.S. eastern seaboard. Scientists have made an effort to control the invasion by removing the fish.

After capture, the fish are brought to the research station in Bonaire to be catalogued and dissected. By figuring out what they eat and how they survive, the station hopes to learn how to control the lionfish and stabilize biodiversity in the Bonaire area.

This is the second group from RIT to venture down to the research station as part of Piccarreto’s course. It is an opportunity for students to improve both their diving and underwater imaging skills.

The students decided to create a video in three parts; first, a section about diving that shows the different species of fish and coral; second, a summary of lionfish and their invasive nature; and third, the capture and killing of lionfish.

While completing around 30 dives in the eight-day period, the group experienced wreck diving, deep diving down to 125 feet, and night diving. The group even completed a dive on New Year’s Eve, surfacing at exactly midnight to see the skies lit with fireworks.

“It was definitely a lot of fun, but a ton of work as well,” says Shane Keller, a photojournalism major.

“When you are underwater, you are practically weightless. Upon surfacing, you realize that you have 40 pounds on your back and a 20-pound camera in front of you,” notes Laura Blank, a film and animation major.

“It is a lot of fun, but it’s actually very serious. Any number of things could have gone wrong during these dives,” adds Chloe Rolls, a fine arts photography major.

One concern when deep diving is the development of nitrogen bubbles in the brain, often referred to as “getting narc’d,” which produces a state similar to alcohol intoxication.

“The original term is nitrogen narcosis and it affects everyone differently, in terms of at what depth you start to feel its effects,” says Keller.

“During one dive, I began laughing uncontrollably through my breathing regulator at 125 feet. You go through air pretty quickly if you get narc’d,” remarks Blank.

Piccarreto notes that most people only make it through the basic-dive program, whereas these students have over 24 hours of time under the surface.

“This course shows employers that these students have a skill that sets them apart. I would dive anywhere in the world with these guys,” says Piccarreto.

“For me this class opens doors, because being scuba certified could potentially mean me getting a job after college,” says Blank.

“I can do things that other photojournalists might not be able to do, such as underwater photography for sports or shipwreck documentation,” remarks Keller.

Piccarreto plans to return to Bonaire next winter with new students, as well as returning trip leaders.

“We are already looking at plane tickets to do it again,” says Rolls.