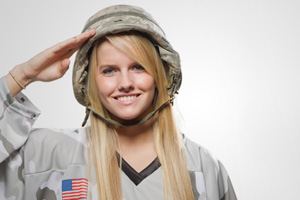 The No. 1-ranked RIT women’s hockey team will pay tribute to the United States Armed Forces during its home games against ECAC West rival Buffalo State College on Friday, Jan. 20 and Saturday, Jan. 21 at Ritter Arena. The Tigers will wear special “camouflage” jerseys for both games, which will be auctioned off online. All proceeds for this event will go towards benefiting The Wounded Warriors Project. For more information, go to http://www.rit.edu/studentaffairs/supportveterans/.

The Wounded Warrior Project is a nonprofit organization that honors and empowers Wounded Warriors who incurred service-connected injures on or after Sept. 11, 2001. The project works to raise awareness and enlist the public's aid for the needs of severely injured service men and women, to help severely injured service members aid and assist each other, and to provide unique, direct programs and services to meet their needs.

The special game-worn jerseys from the two games against Buffalo State will be auctioned off on-line starting Wednesday, Jan. 18 and ending Monday, Jan. 23 at 10 a.m. Both games will get underway at 7:05 p.m. The team plans to sell commemorative T-shirts during the week of January 16-20 on the campus of RIT in the Student Activities Union (SAU) lobby. T-shirts will also be available prior and during both games at Ritter Arena. Admission to both games is free.