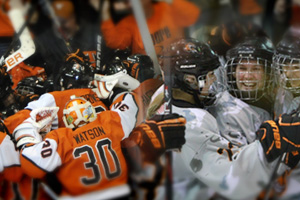 With a national championship up for grabs, the RIT women’s hockey team (26-1-1) will host the 2012 NCAA Division III Women’s Ice Hockey Championships this weekend at Ritter Arena. The semifinals will be held on Friday, March 16, with RIT hosting SUNY Plattsburgh (19-6-3) in the first semifinal match up at 3:30 p.m.. The second semifinal game will begin at 7 p.m. If RIT wins, they will play in the championship game against either Gustavus Adolphus (24-2-2) or defending National Champion Norwich (26-2-1). That game will take place at 7:00 pm on Saturday.

The third-seeded RIT men’s hockey team has advanced to the Atlantic Hockey Association semifinals for the fifth straight year and will look to reclaim the AHA Championship this weekend at the Blue Cross Arena. The Tigers will face the second-seeded Niagara Purple Eagles on Friday, March 16 at 7:05 p.m. If RIT advances, they will play in the Atlantic Hockey Association Championship against Air Force or Mercyhurst on Saturday, March 17 at 7:05 p.m.