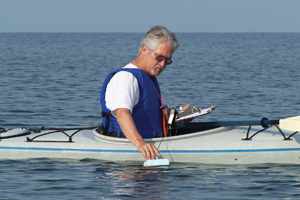 Earth Observation: For over 30 years, RIT imaging scientist John Schott has been a key figure in the design and deployment of the Landsat series of satellites. The NASA- and USGS-led effort represents the largest widelyused, annually updated, source of global remote sensing data and provides

NASA's Earth-observing satellites in the Landsat program have demonstrated the capabilities of remote sensing on a global scale and provided previously unavailable data on global climate change. Imaging scientist John Schott's 30-year involvement with the program calibrating and simulating the technology won RIT its first major research grant in 1981 and laid the cornerstone for the university's imaging science program.

Imagery data from the Landsat series of satellites represents the largest widely used, annually updated source of global data at the human scale, where roads and individual agriculture fields can be seen. It also provides a wealth of historical information on environmental, land, and temperature changes that are greatly enhancing research in agriculture, climate change, and atmospheric science. RIT has a long history of supporting the Landsat program with many students, faculty, and alumni contributing to the satellites' design and operation.

The originator of RIT's relationship with Landsat is John Schott, the Frederick and Anna B. Wiedman Professor in Imaging Science. Schott won a proposal from NASA in 1981 to assist in the development of Landsat 4, the fourth satellite in the series. It was RIT's first major research grant from NASA and marked the beginning of Schott's 30-year history with the land-satellite program. The remote sensing initiative would also become the cornerstone of RIT's Chester F. Carlson Center for Imaging Science. 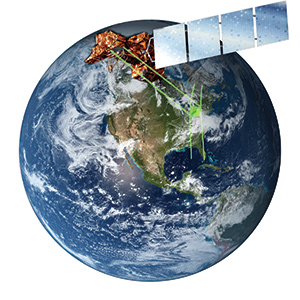 An Environmental Record of the Earth: The Landsat satellite orbits the Earth's poles, passing over the same spot every 16 days to build up a cloud-free composite image over a year. Illustration provided by the Digital Imaging and Remote Sensing Lab.

Today, Schott continues to play an integral role in the Landsat program, which includes service on the U.S. Geological Survey's (USGS) Landsat Science Team, providing expert advice and technical support that has greatly advanced the use and impact of the data collected.

One of Schott's longest running efforts with the program has involved the use of calibration techniques to better utilize temperature data collected by the program over its history.

In 1999, NASA and the USGS asked Schott to cast his calibration net backward 15 years to capture data starting with Landsat 4 and Landsat 5, which were launched in 1982 and 1984, respectively. Schott and graduate student Frank Padula investigated how to calibrate the satellites by looking at instrumented buoys in the Great Lakes and the Atlantic Ocean that belong to the National Oceanic and Atmospheric Administration (NOAA). While the Landsat satellites read temperature on the water's surface, the buoys take measurements about a meter under water.

Padula's master's thesis focused on developing a method for using the NOAA buoys to predict surface temperature. His next step was to propagate it through the atmosphere to approximate the apparent temperature seen by the satellite.

"We figured out that we could very precisely use the NOAA buoys to calibrate this 15-year gap where nobody knew what was going on and in the process we found out that the instruments weren't perfectly calibrated and that there had been a fairly sizable change right in the middle of the period," says Schott. "We fixed all the calibration for all those intervening 15 years. 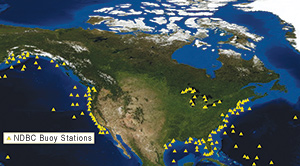 Automated Calibration: Schott’s team is automating thermal calibration of the Landsat satellite data by stitching together various information sources, including global buoy data, into one easily usable system that will be accessible via the web.

"From 1982 to the present, we now have all the instruments well calibrated so that when someone uses them, they get accurate, repeatable results," Schott says. "This has become particularly important because the USGS has made all the Landsat data free, enabling long-term trend studies undisturbed by calibration issues."

NASA recently awarded Schott a contract to automate the buoy analysis technique used for calibration. His team is stitching together information generated and posted on the Internet, including buoy data, meteorological data, data from balloons launched from the airport to characterize the upper atmosphere, and satellite images.

"We're going to try to put ourselves out of business by writing software that will take in all this data, automatically link all of our programs that are now hand done, and post the results on the Internet so that people running the satellite at USGS and NASA just have to look at the website," Schott says. 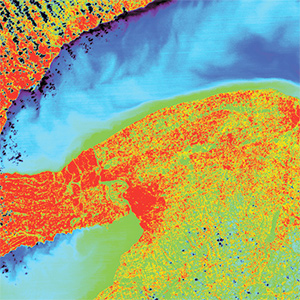 Thermal Mapping: Working with the Jet Propulsion Lab, Schott is assisting the USGS in creating land-surface temperature maps that will allow scientists to assess how different aspects of the Earth have changed over time.

To build the tools for the USGS to mass-produce the data, teams at RIT and JPL are correcting for the atmosphere and surface reflectivity that distorts radiometric signals.

"Landsat has been staring at the globe for nearly 40 years, since 1972. We need to learn how to analyze it and understand what's been going on," Schott says. "You don't want to wait 40 years to learn what processes are impacting the globe. All of a sudden you can do the science today that we'd have to wait years to do. That's the excitement about Landsat at the moment."

Montanaro relies on Schott's team to simulate potential problems in the development of Landsat 8 through the use of Digital Imaging and Remote Sensing Image Generation (DIRSIG), a synthetic image-generation tool developed by Schott and Carl Salvaggio, associate professor of imaging science at RIT. The tool simulates in a computer what an aerial or satellite remote sensing system would see by modeling the thermal and radiometric behavior of the Earth and atmosphere.

The team utilized DIRSIG to build a simulated OLI instrument that was flown on a Landsat orbit around the world. They also used the tool to create simulated images of specific settings, such as Lake Tahoe, which has a lot of terrain variation, making satellite imaging of the lake more complex.

The data collected is allowing designers to test instruments or different designs before spending millions of dollars building the cameras for the satellite and well before the moment of "first light," a turn of phrase in the remote sensing world that signifies when the shutter first opens and captures a picture.

"Being able to preview the images Landsat will produce allows us to spot any potential problems and also allows us to test processing algorithms well before launch," says Montanaro.

"Roughly three years before first light, we're showing them the pictures they will be collecting," Schott adds.

Schott hopes his current and future research efforts will further enhance the Landsat program and its use in Earth observation research. He also plans to continue his equally important three-decade-long effort to utilize the program as a teaching tool for RIT's students and an opportunity to engage his colleagues in research.

"I am extremely proud that so many of the students who have worked on this project have gone on to careers in imaging science and remote sensing," Schott says. "In addition, many RIT faculty and staff have worked with me on different components of Landsat and it is gratifying to know that this has assisted them in developing their own research portfolios.

"Being able to include so many people on this journey has been as important as the research itself."