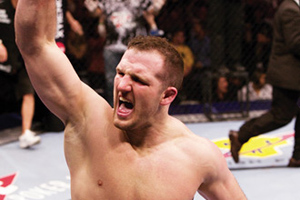 A California-based film crew flew to Rochester to make a feature-length movie —more than four years in the making— based on the life of Matt Hamill, the RIT/NTID championship wrestler who has since gained fame in the Ultimate Fighting Championship arena. Much of the filming was done on the RIT campus.

Hamill was written and is being produced by Eben Kostbar and Joseph McKelheer of Film Harvest, an independent film-production company. A cast of 20 and production crew of 30 also shot parts of the movie in Macedon, Wayne County and in classrooms and dorms at Rochester School for the Deaf.

Hamill, who graduated from RIT in 1999 with a degree in electromechanical technology, won three NCAA Division III national wrestling championships. He was a three-time All-American, New York state champion and RIT Invitational champion. He achieved a career record of 89-3 and was undefeated in his senior year. He also holds the all-time RIT record for the most tournament wins and was inducted into the RIT Athletic Hall of Fame.

The filmmakers wanted to depict Hamill’s childhood, from being diagnosed deaf, being teased growing up and excelling in wresting at RIT.

“I am absolutely thrilled and honored that there is going to be a movie projecting my life and everything I have worked for,” Hamill says. “I hope that it sends a message letting people know that anything is possible with hard work and dedication.”

Filming began in mid-September and continued for about a month. Kostbar, McKelheer and several others rented a house in Rochester where they accumulated props and wardrobes, scheduled film locations, rented equipment, casted actors, hired crew members and slept when they had the time.

Kostbar says he was inspired by Hamill’s story as a deaf wrestling champion and accomplished UFC fighter. He contacted Hamill and arranged for an interview. “I thought this guy’s got an absolutely amazing story as an underdog who became a champion,” Kostbar says.

While attempting to cast roles in the movie months ago, they encountered a setback when members of the deaf community protested the selection of a hearing lead actor originally intended to play Hamill. “We are thankful for this protest because hiring a deaf actor for the lead is the right decision and gives the film more integrity,” McKelheer says.

The title role will be played by Russell Harvard, a deaf actor from Texas. RIT/NTID graduate Michael Spady ’06 (applied science and technology) also has a leading role as Hamill’s friend and roommate.

“Most people don’t have exposure to the deaf community at all,” McKelheer says. “We’ve met a lot of wonderful people who were supportive and embraced us. The culture itself was eye opening for us. We knew going in we were going to be learning about the deaf community. There was a huge learning curve to get it right.”

“These guys have done a fantastic job, not only working hard to make this production possible, but at trying to portray my story accurately,” Hamill says. “The team has traveled from California all the way to New York and back several times. I couldn’t have asked for a better group.”

McKelheer says the most challenging part of making this movie was raising money to have it made—not only due to the current economic conditions, but investors weren’t always eager to contribute to a film without a recognizable, big-name star attraction. And some were concerned having sign language or captions in a movie would make it a risky venture.

“As cool as we think it is creatively—and we think it will be a breakthrough for the community—financial people don’t tend to think of it that way,” Kostbar says.

He says the film should be finished next year and will be entered in film festivals. Whether it is released nationally, sold as a DVD or aired on television has yet to be determined. “But our plan is to come back to Rochester to have a screening,” Kostbar says.

Both Kostbar and McKelheer say they continually have asked for advice from the deaf community. They say the movie won’t be about whether a mainstreamed or residential school is better, or whether it is better to use sign language or be oral.

“What the story is really about is that Matt Hamill doesn’t have any boundaries, whether it’s wrestling or being hearing or deaf,” McKelheer says. “He never wanted to be defined by a culture. It’s about overcoming obstacles. His deafness wasn’t a disability.”

Hamill says his hope is that he can inspire others to follow their dreams. “You can do anything you want in your life. You just have to work for it,” he says.