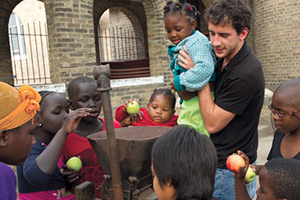 David Kelbe and Mirana Razafindramboa come from very different backgrounds. Kelbe grew up in an affluent Rochester, N.Y., suburb and Razafindramboa hails from Madagascar, an island off the southeastern coast of Africa recovering from political and economic turmoil.

Despite their divergent upbringings, their career goals are the same—help people create better lives for themselves. Their educational experiences as graduate students at RIT—both in and out of the classroom—have shaped their perspectives on the importance of giving back.

“The days I can go volunteer and get away from the intellectual work and share life with people is a really good way to rejuvenate,” says Kelbe, of Victor, N.Y., and an imaging science doctoral candidate who spends at least one night a week working with refugee children at Mary’s Place in Rochester. “I’m not here to just put my head in the books and study all the time, but to give back wherever I am.”

Razafindramboa, a graduate student in the hospitality and tourism management program, is one of 40 Fulbright scholars at RIT. Through her research in the U.S., she hopes to return to her hometown of Fianarantsoa to set up self-help clusters, or groups of villagers who can work together to improve the tourism industry.

The two provide a snapshot of the caliber of students coming to RIT to pursue master’s and Ph.D. degrees. In under a decade, the university has gone from placing a smaller emphasis on graduate education to becoming a player worldwide. In the last six years, RIT has added Ph.D. programs in color science, computing and information sciences, sustainability and astrophysical sciences and technology and today boasts more than 70 programs at the master’s and doctoral levels. The number of graduate applications hit a new record this year. And graduate enrollment continues to be strong with 2,865 students. Of that number, 1,272 come from 103 countries. 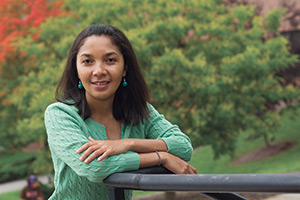 “We’ve had a long history of graduate students from India and RIT’s student population from China continues to grow rapidly. We work very closely with countries like Saudi Arabia, the Dominican Republic and Ecuador who have government-sponsored scholarship programs,” says Diane Ellison, assistant vice president and director of part-time and graduate enrollment services. “We have excellent students who come to RIT from all over the world.”

Kelbe earned his undergraduate degree at RIT in imaging science in 2010 and decided to stay on for his doctorate. He says he initially gravitated to the students that had gone through the undergraduate program with him. “Halfway through my first year in graduate school, I realized there were these other amazing people around me that I hadn’t made an effort to get to know,” he says. “Now some of my closest friends are from China, Nepal and Chile. I realized it was their first time in the U.S. and I could relate to their fears because of my own travels abroad and the challenges of being in a new place and not knowing where your home is.”

He considers St. Matthew’s Orphanage in the Southeast Asian country of Myanmar as his second home. For the past three years, he’s spent a month at a time visiting the orphans during his Christmas holiday.

“These children lived the things I had read in the Bible,” he says. “They had nothing, no possessions, no families and no certain future, yet they gave to me. They opened up their hearts and they loved me as Jesus loves us. And that changed my life.”

Kelbe splits his volunteering time in Rochester between Mary’s Place, a refugee outreach center, and Dimitri House, a men’s emergency homeless shelter. Kelbe enjoys having fun with the refugee children. At Dimitri House, he cooks dinner for the men.

Kelbe’s volunteer endeavors and academic achievements have earned him recognition. In March, RIT honored him with the Bruce R. James ’64 Distinguished Service Award for all of his volunteer work.

The National Science Foundation Graduate Research Program recently awarded Kelbe a $30,000 annual stipend for his dissertation work on LiDAR, a remote sensing technology that operates in a similar fashion to RADAR sensing, but uses an infrared laser instead of radio waves. Using the LiDAR technology, Kelbe and a team of RIT researchers reconstruct 3-D spatial structures in forests to determine properties like how much biomass is stored in tree trunks and potential timber yield, which could slow down the rate of deforestation. He hopes to somehow use this remote sensing technology to help people in developing countries like Myanmar predict social crises.

“This technology is often used following a disaster,” Kelbe says. “If we could be proactive versus reactive with the technology, then I think there is potential to help improve people’s quality of life.” 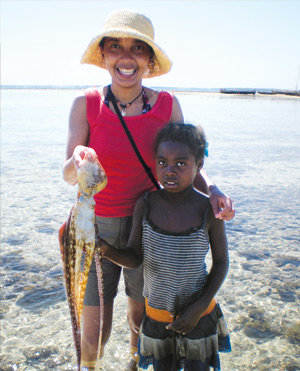 Razafindramboa is guided by her belief that people can alleviate poverty in Madagascar by being part of the solution. After graduation she hopes to help the Malagasy people on the road to recovery from years of political and economic turmoil.

A political crisis in 2009 leading to the ouster of Madagascar’s president impacted her own family’s livelihood.

“My family started a travel agency in 2004, but following the coup of our president in 2009, the political crisis put our business in jeopardy,” she says. “There was a period of time where we had to close.”

Razafindramboa got this idea of social entrepreneurship during an internship in 2009 at a social enterprise called Blue Ventures, which works with communities to conserve threatened marine and coastal environments.

She earned her open-water diving certification during her internship, participating in multiple dives with the staff to collect marine data and identify specifies of fish. She also helped to translate publications and reports from English to Malagasy and French about mangrove forests and marine conservation.

“I want to create self-help clusters so villagers can focus on improving the tourism industry by exporting their goods and promoting the culture. The idea is to have each local community be a leader of development in Madagascar. Trainers, like myself, would provide the tools and training. The Malagasy people have the knowledge and talent in handicraft, but they need someone to push them.”

In April, she talked about the issues facing Madagascar at a roundtable discussion about cultural landscapes at the Naval Academy Foreign Affairs Conference in Annapolis, Md.

To give her the self-confidence to return to her country and bring about change, Razafindramboa completed RIT’s Women’s Career Leadership Certificate Program.

“The knowledge and the experiences I had in the hospitality program were a source of motivation for me to turn my dreams into reality when I return home.”

Hector Flores, dean of RIT’s graduate studies, says RIT is prepared to educate students such as Kelbe and Razafindramboa, who see the bigger picture and are ready to solve the major challenges facing the 21st century.

Those challenges include issues of climate change, global population growth and the flattening of the world from communication technologies. “Most institutions don’t think in those terms,” Flores says. “RIT is uniquely positioned because of its opportunities to integrate the STEM disciplines, the arts and the humanities. We believe that integrating these disciplines better prepares our students for innovation and change in a world that is changing ever fast.”

Shaping a lifestyle out of glass