Competitive sports clubs were a deciding factor for Ali Cawley, a fourth-year ASL-English interpretation major from Massapequa, N.Y., who transferred to RIT to be on the equestrian team. “Being on a team while in college is really important to me. This is the sport I love.”

Hundreds of student-athletes come to RIT because of club sports, says Sarah Griffith, assistant director for clubs and community outreach. Don’t let the word “club” be deceiving, however. Many of these teams have regularly been near the top of their ranked athletic competitions—the bowling team has been ranked in the top 15 collegiate teams in the nation for the past four years, while the cycling and equestrian teams have routinely had individual members place highly in competitions, in addition to successful team showings.

“In many cases, these athletes are representing RIT as the official team in their respective sports, even though they aren’t a varsity team,” Griffith says.

Cawley’s love for her sport was clear at the equestrian team’s first horse show of the 2012–2013 season, on a farm near campus. Since RIT was hosting the event, she and her teammates had the responsibility of helping to organize and run the show, in addition to competing in it.

“Most of the teams that we compete against are much bigger and more well-equipped than us,” says Betsy Khol, a fifth-year industrial and systems engineering major from Vienna, Va., and treasurer of the team. “We are definitely underdogs against some of the big equestrian teams like Cornell, but we do pretty well, considering we can’t get out and ride every day like they can.”

Other club sports include paintball, field hockey and ultimate Frisbee.

Club sport members use their own money to enter competitions. Members of the cycling team, for example, can pay more than $700 in a season, plus an additional $700 or more if the rider qualifies for the national championships.

Former RIT bowler Dan Vick was a 2006 member of Junior Team USA, and he won the 2008 USBC Intercollegiate Singles Championships.

Equestrian team members don’t need their own horses to compete. At each competition, teams ride horses that are housed at the stables hosting the events. Horses used by RIT riders are stabled at Lehman Farms in Pittsford, N.Y., for English riding, and at Evergreen Stables in Scottsville, N.Y., for western riding.

In addition to practices throughout the school year, the 49-member equestrian team participates in horse shows that are part of the Intercollegiate Horse Show Association.

Khol says that both teams have seen an increase in membership and skill in the last three years. Last season, the English team finished as high as second place in one of its shows, while the western team made significant progress in the quality of their showings.

Cory Barber was among the nation’s best high school bowlers, having been recognized by Bowler’s Journal International as a “Top High School Prospect” of 2011.

When it came time to choose colleges, the presence of a bowling team had an impact on Barber’s decision. “I wasn’t going to compromise academics in my decision making, but I wanted to go to a school where I could bowl,” says the second-year chemical engineering major from Irondequoit, N.Y.

The bowling team has reached the United States Bowling Congress Intercollegiate Team Championships tournament in each of the last four years. The tournament pits the top 16 teams in the nation against each other for a chance at the national championship trophy.

The United States Bowling Congress also affords individual collegiate bowlers a chance at a national title in the form of the Intercollegiate Singles Championships. During the 2011–2012 season, Barber, current vice president of the team, earned an entry into the tournament by qualifying as one of the top 16 bowlers in the singles competition—no small feat as a freshman.

The 15-member bowling team competes in 10 tournaments each season against a wide variety of schools from across the country. Some bowling teams share a club-level status with RIT, but others are part of their schools’ athletic departments. In fact, six of the top 10 bowling teams in last season’s rankings have the status of an official athletic team within their school, including No. 1-ranked Robert Morris University of Illinois, and last year’s national champion, Webber International University in Florida. 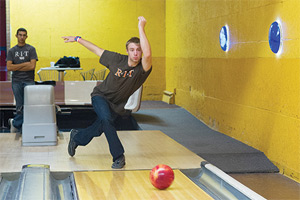 “We hold our own against the national powerhouses in collegiate bowling,” says Tom DiPietro, who bowled on the team from 2002 to 2005 and volunteers as a coach. “It’s not always easy since there are club dues, travel expenses, late-night practices and long weekends of competition and travel. However, team camaraderie and love for the sport keep the bowlers driven to compete at the highest level.”

Pedaling to the top

Not every club sport athlete comes to college planning to join a team. Second-year photojournalism major  Rugile Kaladyte found out about the cycling team as she was applying to RIT.

“I played sports in high school, so it was almost instinctive to continue in some sort of athletic activities here in college,” says Kaladyte, who grew up in Brighton Park, Ill.

The cycling team, which has about 30 racing members, is split into three main components: a mountain team, a road team and a cyclocross team. The cyclists compete in races throughout the school year across the northeastern U.S. as part of the Eastern Collegiate Cycling Conference of USA Cycling Collegiate.

Founded in 2008, the club has transformed from a small group of casual riders into a nationally ranked competitive force. During the 2009–2010 season, the cyclocross portion of the team was ranked fifth in Division II of USA Cycling Collegiate. The cyclocross team moved up the rankings to claim the No. 2 spot in Division II the following season. 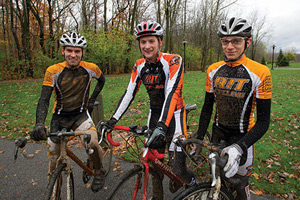 The RIT cycling team practices in the grass and woods on campus despite challenging weather conditions.

Fourth-year mechanical engineering major and president of the RIT cycling club, James Parascandola, says that the team’s growth and success are the result of intense weekly practices and the dedication of the riders.

“We all know that it’s going to be a big commitment going in,” says the Londonderry, N.H., native. “We do it for our love of competition and to try to grow our team.”

There have been cases in the past where competitive sports clubs have become varsity athletic teams. The crew team became a varsity sport in 1996. Other programs have started as club sports, including women’s cross country and women’s lacrosse. Even the famous NCAA Division I men’s hockey team had humble beginnings as a club.

Varsity sports are housed in the athletic department, which supports all 24 teams. Varsity sports teams have access to university funding, expert coaching, training  facilities, sports medicine staff and publicity. They are also permitted to use the official RIT Athletics tiger logo on things like uniforms, equipment and fliers.

The Center for Campus Life and Student Government jointly oversee RIT’s 21 competitive club sports teams. The student-athletes on club teams are largely responsible for the operation of their organizations. This includes arranging travel to competitions, securing funding through fundraisers and outside sponsorships and setting up competitions with other schools.

Lou Spiotti Jr., executive director of athletics at RIT, says that due to the very challenging economic climate, it has become difficult to add any more varsity sports at this time. “It’s great that students have opportunities through club sports to stay active and involved.”

Videos from bowling and cycling are also available.