Skate for the Cure 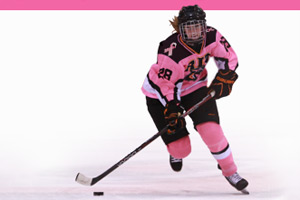 The RIT women’s hockey team will be teaming up with the CURE Childhood Cancer Association to “Skate For The Cure” during their game versus College Hockey America foe Syracuse University on Friday Feb. 8 at Ritter Arena at 7:05 p.m.

Tickets for the game are available at the Gordon Field House and Activities Center Box Office or by phone at (585) 475-4121. Fans can also purchase tickets at RITtickets.com. Ticket prices are $5 for adults, $4 for faculty/staff/alumni and $3 for students and youth. RIT student admission is free with valid ID (ticket must be picked up at the box office, one per ID).

For an extra $1 donation, fans will receive a team photo that players can sign at the RITZ Sports Zone following the game. RIT will also wear special pink jerseys that will be available for purchase during a silent auction that will take place during the game.

All proceeds to CURE Childhood Cancer Association will be donated through the RIT United Way Campaign. For more information, visit www.curekidscancer.com.

The RIT women’s hockey team has made a habit of giving back to the community. In 2010 and 2012, RIT teamed with the Zeta Tau Alpha sorority for the “Make the Rink Pink” weekend, which raised over $47,000. The proceeds were donated evenly to the Rochester General Hospital’s Lipson Cancer Center and the Zeta Tau Alpha Foundation for Breast Cancer Education and Awareness.

In 2011 the Tigers raised $10,219 for Finger Lakes Health in conjunction with Geneva General Cardiology Associates in an effort to “Black Out Heart Disease.”

The Tigers trail the Orange by six points for second place in the CHA standings. The teams played two evenly matched games earlier in the season. On Nov. 10, they skated to a 2-2 draw at Ritter Arena. 10 days later, Syracuse snuck out a 2-1 overtime victory.

In RIT’s most recent contests, the Tigers traveled to Lindenwood and came away with one point in two games. On Friday, Tenecia Hiller (Brampton, Ontario/St. Augustine Secondary) tied the game at one at the 14:32 mark of the first period and neither team would find the back of the night the rest of the way. The Tigers lost a heartbreaker the following afternoon, rallying from a 3-1 third period deficit on another Hiller goal with just over a minute remaining. However, the Lady Lions answered with the game-winner with only seven seconds remaining.

With four power-play goals over the weekend, the Tigers are 12th nationally, converting at 21.5 percent (28-of-130) and have scored on the man-advantage in 10 of their last 11 games.

Syracuse will enter the game on a six-game winning streak and off a sweep at Robert Morris. The Orange took two one-goal victories. Nicole Ferrara scored twice on Friday to give Syracuse a 3-2 win, giving Syracuse their most conference wins in the history of the program. Ferrera also scored the game-winner in the last minute of play on Saturday in a 2-1 victory. Holly Carrie-Mattimoe leads the team with 22 points, while Melissa Piacentini is right behind with 21. Shiann Darkangelo has a team-high 13 goals. Kallie Billadeau has seen the bulk of time in net, recording a 12-6-0 mark with a 1.39 goals against average and .945 save percentage.

The game will be aired live on Time Warner Cable Sports channel 26 or 1026 for high definition subscribers with Gene Battaglia and former RIT standout Katie Stack ’11 bringing you the action from Ritter Arena. The game will also be streamed online at witr.rit.edu and live stats will be available here.

Come out and support a tremendous cause Friday night, as the Tigers compete in their first season as a Division I program and “Rock the Ritter.”