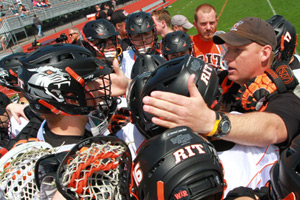 For the first time in the 46-year history of RIT men’s lacrosse, the Tigers will play for an NCAA title. The Tigers will face Stevenson University at 4 p.m. Sunday, May 26 at Lincoln Financial Field in Philadelphia in the 2013 NCAA Division III Men’s Lacrosse Championship.

RIT advanced to the championship with a thrilling 10-9 overtime win over top-seeded and previously undefeated SUNY Cortland on May 19.

For Sunday’s championship, single-game tickets and packages are available at Ticketmaster.com. Single-game tickets are $26.50 for general admission. A general admission ticket allows you into the official RIT section, which will be Section 109. Weekend packages are also available for all the NCAA championship lacrosse action for Division I, II and III.

An RIT tailgate party for alumni, parents, former players and fans begins at noon Sunday, May 26 in Parking Lot E of Lincoln Financial Field. The tailgate is free to attend but your RSVP is appreciated for planning.

Can’t make it to Philadelphia? Click here for the live online NCAA broadcast.