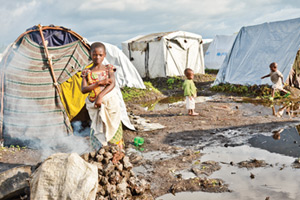 Because of violence in the Democratic Republic of Congo, refugee children and their families are moved to an Internally Displaced Persons camp in Eastern Congo. (Steven Pfost)

Many of them had never left the borders of the U.S., but when the opportunity arose for seven RIT photography alumni to donate their time to travel to developing countries ravaged by violence, malnutrition and poverty, these photojournalists did not hesitate. Their mission: to document unsung heroes, faith-based social entrepreneurs transforming lives and bringing hope to some of the worst parts of the world.

Each year, the Opus Prize Foundation awards a $1 million prize to a faith-based innovator tackling global issues and affecting social change. Since its inception, the Opus Prize has been awarded to 10 people.

“Doug suggested we do a 10-year anniversary book that would be photo driven to tell the stories of these 10 faith-based entrepreneurs,” Neureuther says. “With Doug’s history at RIT, he had photographers that we could send to each of these countries who would do a great job getting photos. We were just absolutely thrilled with this idea and are even more thrilled now after seeing the work that each of these photographers has done.” 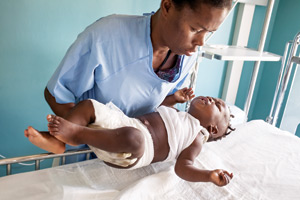 Rea is a professor of photography at RIT. He is also a freelance photographer working for NGOs (non-government organizations), news agencies and motorsports interests. His work has been published in numerous national and international newspapers and magazines. Rea documented the work of two Opus Prize recipients, traveling to Tabarre, Haiti, for 2012 Opus Prize recipient Father Rick Frechette and Karonga, Malawi, for Sister Beatrice Chipeta, the 2010 Opus Prize recipient.

Pfost currently lives in Lindenhurst, N.Y., and is a daily contributor to Long Island’s Newsday. Since graduation, he’s interned at The Dallas Morning News, Concord Monitor and the Rochester Democrat and Chronicle. Pfost has won honors and awards for his work including College Photographer of the Year in 2010 and the Associated Collegiate Press NPPA Contest in 2010. Pfost documented the work of two Opus Prize recipients, Maggy Barankitse in Ruyigi, Burundi, and 2011 Opus Prize recipient Lyn Lusi, who created HEAL Africa in Goma, Democratic Republic of Congo.

The alumni took vacation time from their regular jobs to take on these photo assignments. The foundation paid for their travel expenses. Rea photographed two of the recipients in October 2011 and August 2012, which gave him a sense of the kind of photographers needed to cover the remaining eight.

Steve Pfost ’10 (photojournalism) also covered two Opus Prize recipients in Africa—traveling to Burundi at the end of October and then finishing in the Democratic Republic of Congo the first week of November.

“I saw it as a great opportunity for an all-expense-paid trip to Africa, somewhere I’ve always wanted to go,” says Pfost, who works for Newsday on Long Island. “Burundi was all I had imagined Africa to be with clay huts, foliage everywhere. The first day I woke up to a huge rainbow. The experience on a whole was great as a photojournalist. There were no distractions; it was all about concentrating on photographing.”

Pfost documented the work of Marguerite “Maggy” Barankitse, who launched Maison Shalom, or “House of Peace,” for orphans with HIV and AIDS and child soldiers. Barankitse survived a rebellion in Burundi in 1993, but both her parents were killed. Shortly after the uprising, she began Maison Shalom. The safe haven includes facilities such as a church, school and state-of-the-art hospital.

“Miss Maggy’s work is impressive. Out of swampland, she’s created farms and invested in cows and cheese machines so the residents can make their own food and be self-sufficient,” he says.

Pfost then went to the Congo photographing HEAL Africa, an organization that runs a state-of-the art hospital, which offers health care to the poor and provides fistula and clubfoot surgery, rape counseling and HIV/AIDS education.

Pfost’s experience in Goma was much more dangerous than Burundi. Rebel M23 fighters were stationed outside the borders of Goma during the weeks Pfost was there. Rebels overran the city, killing many residents only days after Pfost left to return home.

“The people of Goma kept saying the rebels were coming closer,” says Pfost. “It was very tense. My first night there I cried myself to sleep. United Nations helicopters were flying overhead and Congolese army soldiers carrying machine guns were patrolling the area. The experience is something I’ll never forget.” 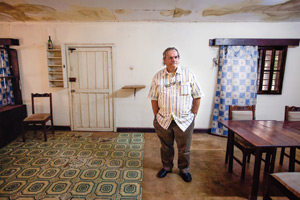 Witek, an award-winning multi-media journalist, has been taking mental pictures since before his fingers could work a camera. Witek is currently a video journalist for the Beaver County Times in western Pennsylvania. He traveled to Kigoma, Tanzania, to photograph the work of 2007 Opus Prize winner Brother Stan Goetschalckx.

Lohmiller, who lives in New York City, first started taking pictures when she received a Nikon camera for her 16th birthday. Since graduating from RIT, Lohmiller has interned with photographer Lauren Greenfield and interned at a variety of newspapers around the country. Lohmiller traveled to Casablanca, Morocco, to shoot images of 2009 Opus Prize winner Aïcha Ech-Channa.

Communication barriers and hard feelings were part of the overall experience for Emma Tannenbaum ’09 (photojournalism). The staff photographer at the Rocky Mountain Telegram traveled to Haiti and then the Dominican Republic. Tannenbaum had a translator, but he wasn’t fluent in English.

“According to the organization, there’s not a big culture of volunteering in Haiti,” Tannenbaum says. “The volunteers were resentful that an American was flown in and getting paid. My translator was unable to convey that I also was a volunteer. I tried to overcome the resentment with a positive tone and positive body language to try and build good will.”

The organization’s work she documented, Pastoral da Crianca, is a public health program initially launched in Brazil to help pregnant women and children, teaching mothers about nutrition, childrearing techniques and breastfeeding. The program has expanded into Haiti and the Dominican Republic.

“It was amazing to go on these home visits with volunteers in the Dominican Republic,” says Tannenbaum. “For the parents, it’s a big deal to have volunteers come once a month and monitor their children’s stages of development. One mother told us that when she got frustrated she would tie up her three sons and beat them until she was no longer angry. She was beaten as a child, so that’s what she did to her own. During another home visit, I spent an afternoon with a mother who scrubbed the floors and washed dishes all day because her baby had started to crawl and she was worried about cholera.”

Dr. Zilda Arns Neumann, founder of Pastoral da Crianca and the 2006 Opus Prize winner, was among those killed during the Haiti earthquake in January 2010 while in Haiti to meet with leaders on how to bring the program there.

“The program was very dear to Dr. Neumann and she felt Haiti needed her help,” says Tannenbaum. “It’s this ongoing struggle of trying to make people understand that your neighbor’s problem is your problem, too. I witnessed the positive effects of the program in the Dominican Republic. It gives you hope for the future of Haiti and what the program will become.” 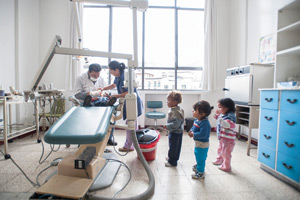 Richins is an award-winning professional photographer specializing in high-end portraits, sports and documentary-style event photography in the greater Boston area. After graduating from RIT, Richins interned at the Poughkeepsie Journal, the Rochester Democrat and Chronicle and Newsday before landing a staff position as a photographer and multimedia journalist at the Pocono Record in Stroudsburg, Pa. In May 2011, he left his staff job to pursue his own photography business in his home state of Massachusetts. Richins traveled to Quito, Ecuador, to shadow Father John Halligan, the 2010 Opus Prize recipient.

Londres worked as a staff photographer at the Utica Observer-Dispatch for two years before deciding to be his own boss. He accepts assignments worldwide and is based in Philadelphia, Pa. Londres documented Monsignor Richard Albert in Kingston, Jamaica. Albert was awarded the Opus Prize in 2004.

Much like Tannenbaum who found travel in Haiti to be difficult because the earthquake wiped out roads, Michael Conti ’11 (photojournalism) faced similar transportation issues while covering REAP (Reach Education Action Programme) in India the first week of last November.

“It’s inspiring how REAP is able to overcome so many challenges while covering such a large region of both urban and rural areas,” says Conti, who works for Journal Communications, which produces travel magazines. “There are significant issues with India’s infrastructure. For example, to drive 30 miles, we would be in the car for two hours on bumpy roads with no traffic signs.”

REAP runs more than 450 literacy centers in an effort to combat India’s high illiteracy rate and mainstream children into school.

“My experience with REAP was amazing. It was a great life experience. REAP has an incredible leader in Father Trevor Miranda,” Conti says. “I wanted to make sure to capture every aspect of the charity work because not only does he lead small classrooms for rural and urban children, Father Miranda runs boarding schools and has started self-help groups for women to empower them to become more financially independent.”

“Michael was very adaptable to different situations,” he says. “He captured the depth of our work, the struggles and the difficult circumstances we work under. This itself is a telling story. We hope the images will generate a great deal of interest in more people collaborating with REAP to bring education and empowerment to the poorest.”

The book came out in early February to commemorate a 10-year Opus Prize anniversary celebration hosted at Marquette University Feb. 4-8. In addition to the 100-page book, the images appeared on banners, posters and invitations to promote the university’s weeklong celebration of the Opus Prize recipients. Another idea is to use the images as part of a traveling exhibit. 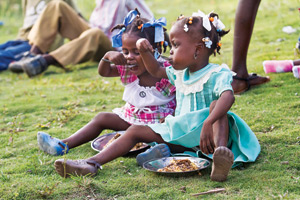 Tannenbaum is currently a staff photographer at the Rocky Mountain Telegramin Rocky Mount, N.C. Tannenbaum completed internships at the Birmingham News and the Fayetteville Observer. She documented the work of the organization Pastoral da Crianca (Pastoral of the Child) in Haiti and the Dominican Republic, started by Dr. Zilda Arns Neumann, the 2006 Opus Prize winner.

Conti is a photographer working in Franklin, Tenn. With his pictures, he helps promote small towns across America as well as documenting agribusiness and tourism. Conti shot images of the 2005 Opus Prize winner Father Trevor Miranda in Mumbai, India.

“These photos will be really important to the recipients themselves,” adds Neureuther. “It’s transformative what these organizations are doing and it’s conveyed in the images. You can’t walk away from spending time with these Opus Prize recipients without asking yourself, ‘What more should I be doing to make the world a better place?’”

The first Opus Prize was awarded in 2004. The Opus Prize Foundation awards a $1 million faith-based humanitarian award and two runner-up $100,000 awards each year.

The 2012 Opus Prize recipient is Father Rick Frechette, an American priest and doctor who has lived in Haiti for 25 years and started St. Luke Foundation. St. Luke Foundation provides health care and education to more than 150,000 people and employs 1,600 Haitians.

To learn more about the Opus Prize, go to www.opusprize.org.