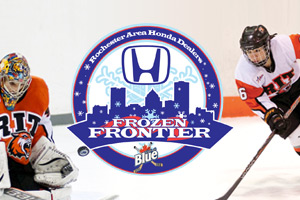 RIT may be in the middle of constructing the Gene Polisenni Center for Tiger hockey next season, but they are still making history this season.

The games are part of a 10-day festival, running Dec. 13 to Dec. 22, serving as a celebra–tion of outdoor hockey in downtown Rochester. Frontier Field is the home of Triple-A baseball’s Rochester Red Wings.

As part of the Frontier Field event, the ballpark will also host a contest featuring the Rochester Americans of the American Hockey League on Dec. 13, several Section V high school hockey games, and an alumni game featuring former players from the Amerks and Buffalo Sabres, and several community events.

Learn more about the event at the Frozen Frontier website.
Tickets for both RIT games are available at the RIT Tickets website.