Perfecting the Performing Arts on campus

As an RIT student, Jon Roberts ’70 (imaging science) had an obvious affinity for science, successfully navigating through rigorous academic course loads each quarter. But, being raised around New York City and Broadway, he always had a love for singing, performing and playing music.

Today, Roberts, the 2013 Distinguished Alumnus from the College of Science, enjoys his “day job” as senior partner in The Marbury Law Group in Reston, Va., practicing in security clearance law, patents, copyrights and trademarks—and he has not lost his passion for the performing arts. He remains actively involved in community theater in the Washington, D.C., metro area and regularly works with venues in performance, sound and projection design. In fact, his commitment runs so deep that he is incorporating a recording studio and rehearsal space into his home for anyone interested in “tuning up” their voices, rehearsing plays or playing music.

Roberts fondly recalls his days singing alongside his friends in the Ritzskeller as a member of RIT’s Glee Club and in a “not very well known” folk group. He hopes current RIT students will continue to earn degrees in their primary fields of study, while having the opportunity to educate themselves in the performing arts.

RIT officials agree and have formed a task force to look at ways to give today’s students, who are coming to campus with multiple interests, more opportunities to study music, dance and drama.

“We have an important role to play as an institution to present the performing arts in a way that shows the world the synergy between technology and the arts,” says Carl Atkins, professor and director of performing arts at RIT and a leader of the task force. “The students who study performing arts are serious about the art and their craft, and we can showcase something amazingly unique at RIT—a high level of performance paired with a technological component. This is what our students desire. Want to talk about innovation and creativity? Just look to our performing arts students.”

To show your support for the performing arts at RIT, go to www.rit.edu/makeagift.

Dana Gioia, former chairman of the National Endowment for the Arts, says new research shows that participation in the performing arts leads to a positive cognitive impact, including increases in mathematical ability, problem solving and social performance.

According to Gioia, the Judge Widney Professor of Poetry and Public Culture at the University of Southern California, arts education helps create people with the ability to lead their lives in a complex and changing society.

“Scientific research endorses my belief that arts education broadens intellectual and social ability,” Gioia says. “Future engineers, doctors and lawyers all need arts education. It brings them in touch with the complexity of humanity and reality.”

Michael Ruhling, professor of performing arts/music in the College of Liberal Arts and director of the RIT Orchestra, says the task force is a first step to address shortcomings that have been apparent for years.

He points to opportunities to expand rehearsal and performance spaces on campus and increase resources and awareness at RIT and in the broader community regarding performing arts activities. He would like time and funding to develop innovative curricula and an inventory of equipment and materials to support the growing needs of performing arts scholars.

“Our performing arts students do a lot with very little,” Ruhling says. “The time has come for RIT to offer its students studying the performing arts a level of support indicative of the top-rate institute of higher learning it is striving to become.”

The task force is already looking at ways to harness existing resources. For example, Atkins hopes to review the booking schedule for venues such as Ingle Auditorium in the Student Alumni Union— currently an all-purpose space—to determine whether blocks of time can be reserved solely for performing arts rehearsals and performances.

Atkins also believes students would benefit from strategic partnerships between faculty from the College of Liberal Arts and other RIT colleges that would result in offering supplemental instruction to the performing arts curriculum.

Thomas Warfield, director of the RIT/NTID Dance Company and co-chair of the task force with Atkins, says his goals for this endeavor are clear.

“Fine arts teachers are masters at blending cognitive thinking with creative thinking to develop skills our students will use for the rest of their lives. We can teach them self-reliance, cooperation, self-worth, collective creativity. We help develop individual, personal talents that enhance their intellectual thoughts.”

Constance Gauthier ’10 (biomedical photographic communications) is one of Warfield’s former students and hopes others can experience what she describes as a “rush” when she performs on stage as a competitive swing dancer.

Gauthier discovered dance when she was 12 years old and fell in love with performing almost instantaneously. Her talent led her to continue dancing through high school, and she enrolled in several of Warfield’s dance classes at RIT. 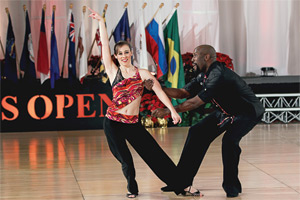 Photo by Liza May

Today, Gauthier has channeled that creativity in just about every aspect of her life. In addition to her full-time career as an architectural photographer in Washington, D.C., she is a major player in the “underground society” of swing dancers. She dances competitively around the country and speaks at swingdance conventions and choreographs and teaches routines.

“Dance has taught me so many things,” she adds. “It has taught me how to look professional and how to push my body to the limit.”

Roberts is hoping he can personally make a difference when it comes to opening doors for students interested in the performing arts. He and his wife, Jessie, a former theater major and stage performer in New York City, have created an endowed scholarship for RIT engineering and science students who commit to making a meaningful contribution to the performing arts.

“I’m very close to RIT and had been thinking about ways to give back to the college community,” he says. “I wanted to develop a scholarship that is aimed at students expanding their horizons and following something that they are passionate about themselves—just like I did.”