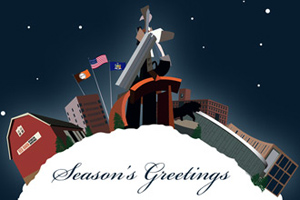 2009 was a memorable year! RIT welcomed its largest freshmen class, as enrollment neared 17,000. New facilities opened, including the Center for Student Innovation. More academic programs, such as the new Ph.D. degree in sustainability, were brought on line.

RIT is building its strategic alliance with Rochester General Health System, and we continue to expand our international reach through relationships with more than 60 countries.

And more than 3,500 graduates were inspired by Xerox CEO Ursula Burns, the first African American woman to lead a Fortune 500 firm, during her keynote address at the 124th Commencement.

So what’s in store for 2010? Well, another exciting season of Tigers hockey is already underway. The Vignelli Design Center and Global Village will further enhance our growing campus. The 3rd annual Imagine RIT will enchant even more visitors, and CBS News veteran anchorman Bob Schieffer will address graduates at the 125th Commencement.

Holiday greetings from everyone at RIT!