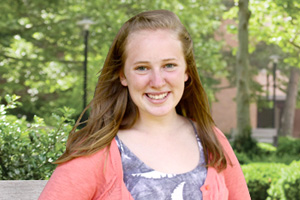 Jen Lamere is fairly accomplished for having just finished her first year of college. The software engineering student at Rochester Institute of Technology, won a 2014 Net Award in the category of Emerging Talent of the Year. She was the only woman nominated in the 10-person category and the only nominee from the U.S. She flew to London, England, to attend the awards ceremony.

“I'm very honored to have received this award and am thankful of the support I had received from my friends, family and RIT,” said Lamere, who is originally from Nashua, N.H.

“Jen really struck a chord with our judges because of how much she has achieved in the last year,” said Oliver Lindberg, editor of net magazine. “Her Twivo app is very impressive, especially when you consider she only started coding a year ago.”

The Net Awards aren't her first major honor. Lamere’s Twivo app won the grand prize at Boston’s TVNext Hack. The app allows Twitter users to block television spoilers from their Twitter feed. The app is available for free on the Chrome Web Store.

Lamere also became Twitter’s youngest-ever intern, working on the Crashlytics team for about 10 weeks during the summer of 2013. She is currently interning with Twitter again this summer.