On Friday mornings, RIT lacrosse player Patrick McMullan isn’t  exercising in the weight room, doing his homework or even sleeping in. Instead, he’s on the floor in a Rochester elementary school classroom, reading to, making crafts with and doing puzzles with energetic youngsters.

“I think it’s a great way to start the weekend,” said McMullan, a third-year biomedical sciences major from Easton, Pa. “Everybody is stressed with school, and some people might think of it as a chore. But at the end of the day, it brings us back to our roots.”

Whether it’s preschoolers at Margaret’s House selling baked goods to help the United Way, fraternities raising money for charity, faculty members volunteering to teach classes to high school students or alumni collecting items to send to troops overseas, RIT has been giving back to the community for years.

Many RIT students, faculty and staff  no doubt volunteer in the community  individually. But hundreds of clubs,  classes and organizations also work  together to help others off campus— exercising dogs at a nearby animal shelter, tutoring at-risk students in Rochester schools or helping build homes for the needy in Georgia during spring break.

“We’re always doing something to  engage the students to teach them,” said Phyllis Walker, assistant director for the RIT Leadership Institute and Community Service Center. “You don’t have to save the whole world. Something small can have an impact on someone’s life.”

RIT encourages community service  by requiring it each semester from some student clubs. RIT also encourages its  employees to take part in the annual United Way Day of Caring, where they could help out the Greater Rochester community in many ways. Even a Community Service Fair is offered on campus, when local agencies come to campus, talk about their work and recruit volunteers. 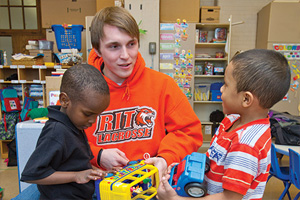 RIT lacrosse player Patrick McMullan, a third-year biomedical sciences major, along with a dozen other varsity athletes spend time each  week reading or interacting with  the children at John Williams  School No. 5 in Rochester.

Elementary students are eager to come to school Friday mornings at Rochester’s John Williams School No. 5. That’s when a dozen or so RIT varsity athletes such as McMullan or Wallace Center personnel visit to spend time reading or interacting with the children.

“RIT READ: Hope in Action” is a  collaborative community outreach  program between The Wallace Center and student athletes that began in 1997.

“Our students love them,” said Principal Joanne Wideman. “They’re  so happy to see them and look forward to them reading to them. They see them as a big brother or sister. And the RIT students are so tall — the children see them as this really awesome person who  is there to help them learn. And they all want to go to RIT.”

“A lot of these kids don’t have a male  role model to look up to,” Visconte said.

Sitting on chairs much too small for them, the RIT students gave high-fives  to children who found matching alphabet letters on puzzle blocks.

“These kids mean the world to me,” said Jess Kramer, an RIT basketball player and fourth-year business management major from Fayetteville, N.Y. She spent her time reading with a small group of students. Many of the young children hugged the RIT students as they left for the day.

“See-ya RIT,” another student yelled as the RIT students walked down the hallway. 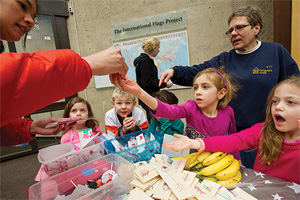 RIT faculty and staff are becoming major donors to the Rush-Henrietta Area Food Terminal’s Adopt-A-Family Program, donating and distributing food and gifts to families in need in December. Last year, RIT was responsible for adopting 31 of the 63 families on the list seeking assistance, providing them with food, toys and gift cards. Some families had as many as 12 individuals.

“Every year, the needs of the community are met to a large degree by RIT,” said Meredith Smith, associate vice president for Government and Community Relations, which oversees the program for RIT. Departments within RIT adopt families on the list, learn what their adopted family needs, then donate and deliver the food, toys or gift cards.

“Some RIT faculty and staff get to  know the families they are serving and  we find out that many of these families have recently lost a spouse or have been laid off from work. These families, our Henrietta neighbors, are incredibly  grateful. It’s very emotional,” Smith said.

Qualifying families within the Rush-Henrietta School District contacted the  food terminal with their wish lists. For some, it was the first time they had ever sought assistance.

“I don’t know what we would have done without RIT,” said Eileen Clark, coordinator of the Rush-Henrietta Area Food Terminal. “RIT helped a total of 64 adults and 74 children this year. If RIT didn’t help us, we would have had a problem. We wouldn’t have the money to go out and buy all that.”

“RIT is not an isolated island,” she said. “We know we sit within the town of Henrietta and we care about this community.”

United Way is the most familiar charity supported by RIT students, faculty and staff. More than $2.1 million has been raised in the RIT United Way campaign in the past five years. The goal for this year’s campaign, which ends April 4, was $400,000.

Last year, RIT ranked 8th out of 800 organizations for total dollars contributed to the United Way of Greater Rochester, and RIT has the highest average gift per donor than any other local college or university.

United Way is also a popular beneficiary of fraternities and sororities at RIT throughout the year. In 2012, RIT students were recognized by United Way for  “extraordinary fundraising achievement.” Students have raised nearly $74,000 in the past three years for United Way, said Lynn Rowoth, RIT’s director of Special Events and Conferences. 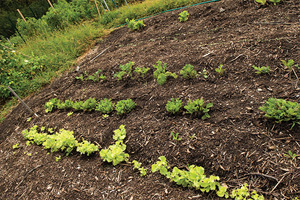 Produce from the RIT Community Garden, located at the southern edge of campus,  is regularly donated to organizations like Recover Rochester and Foodlink.

A call for service

Being a member of RIT’s ambulance corps is volunteer work in itself. But 10 RITA members also volunteer in neighboring fire and EMS agencies, including Henrietta, Chili, Brighton and Gates.

Two examples are Chris Soufleris, a second-year biomedical sciences  major from Irondequoit, N.Y., and Zach Roberts, a fourth-year criminal justice major from Honeoye Falls, N.Y. Both also give their time as volunteer firefighters for the Chili Fire Department Company No. 4, just across the Genesee River from the RIT campus.

“After joining RIT Ambulance, I realized I loved it, but I wanted more,” Soufleris said. “I wanted to reach beyond the college campus and expand the demographics I served.”

Roberts, who is chief of operations for RIT Ambulance, volunteers because he likes to help others. “I like making a difference in people’s lives. And it’s always different and exciting. There’s never a normal day.”

Community service doesn’t mean you have to leave campus. Construction of the Gene Polisseni Center will be winding down this summer, but in its shadows, volunteers from RIT will still be digging in the ground. They will be tending to the RIT Community Garden, a place where students, faculty, staff or alumni can plant flowers or food for themselves, or others.

Seeds get planted in the College of Science’s greenhouse in mid-March,  but the planting in the garden is done around the end of May.

“It’s great getting out there in the  sunshine, having organic produce, and it  is giving back to the community,” Horak said. “It’s an opportunity for any groups  or individuals to do some community  service, and it’s great for those who don’t have transportation.” 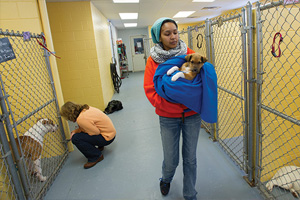 Jannel Morris, a fourth-year Saunders College of Business student, regularly visits Scottsville Animal Hospital with several other students to socialize the cats and dogs in preparation for their “forever homes” with new families.

Other recent ways RIT gives back to the community: