RIT grads shine in the new world of social media 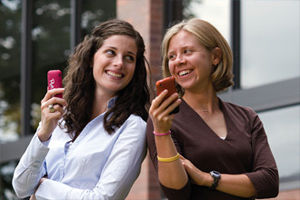 These are phrases that describe the realm of new media encompassing – but not limited to – popular online applications such as Facebook, Twitter, YouTube and LinkedIn, along with activities such as blogging and podcasting.

The explosive growth of social media has left even “power users” trying to figure it all out: How do they harness its vast potential?

RIT alumni – on and off campus – are among those jumping in and using new channels to connect with new (and established) audiences in innovative ways.

Admissions: Online and face-to-face
Ashley Hennigan ’07 (fine art studio) reaches out to prospective RIT students in both new and traditional ways. An admissions counselor for RIT’s Office of Undergraduate Admissions, Hennigan uses social media to connect with newly accepted students – including those still on the fence about whether or not to attend the university – and she spends about half her time on the road.

While making tried-and-true face-to-face connections with would-be RIT students in New York City and Long Island, she simultaneously uses Facebook and Twitter to connect with students anytime, anyplace. And, on occasion, she helps resolve problems.

“I’ve been able to triage problems via Twitter,” Hennigan recounts. “A student posted, ‘Oh no, RIT never received my deposit’ – and I caught it the second he posted it and ran over to finance.”

Due largely to Hennigan’s efforts, RIT was recently recognized by bluefuego.com (a Web site devoted to helping colleges and universities use Web-based tools in admissions and marketing) as one of the most “conversational” college admissions “tweeps” (Twitter-speak for people and organizations using the microblogging application).

Hennigan notes that many Twitter “followers” of RIT Admissions are older than traditional pre-college or college-aged students (something true of Twitter users generally) – making the use of multiple social-media channels crucial for connecting with incoming students.

“I would like to see us – at RIT – being even more connected in these spaces,” she says, predicting growth in real-time applications aggregated and accessible from a single source.

Her advice: Stay in touch with the ever-changing social-media landscape by following such sites as Mashable.com (self-described as “the world’s largest blog focused exclusively on Web 2.0 and social media news”), and become familiar with applications’ privacy settings.

“I think interactive social media is definitely here for the long haul,” she adds. “Personally, I can’t get away from it – I’m attached to my iPhone.”

Alumni Relations: Staying connected
While RIT Admissions uses social media to target arriving students, the focus of an RIT employee across campus is on those who’ve departed Brick City: alumni.

“I try to put myself – as an alum – in ‘alumni-outside-of-the-university’ shoes,” says Pikus, a Buffalo native who joined alumni relations in January 2009. “What would interest me? What would I want to know about what’s going on at my alma mater?”

In those shoes, Pikus has gone an extra step by creating a tutorial and training colleagues about using social media on the job. She offers simple but important tips: Show enthusiasm, be honest and respond quickly to other users.
Before joining alumni relations, Pikus honed her social-media skills as a Web content manager and communications assistant at George Eastman House in Rochester. She is currently pursuing a master’s in information technology at RIT.
She believes next-generation mobile technologies are the next big thing.
“My main focus right now, for this year, is to develop a system to communicate with alumni via their mobile devices,” Pikus says.

“With RIT grads especially, many are more comfortable communicating via Web and e-mail – so, I think electronically is a great way to broaden our reach to the more than 100,00 alumni,” she adds. “We want people to connect and benefit from communicating with RIT and their fellow classmates. My main goal is to keep alumni informed that your relationship with RIT doesn’t stop when you graduate.”

But while social media and mobile technologies are vital tools, even she needs an occasional break. After spending most of her workday “connected,” Pikus enjoys using traditional communication vehicles – such as the magazine you’re holding.

“The combination of all of them – even print – is really important,” she says.
Predicting that social media’s “big hitters” – Facebook, Twitter, YouTube and LinkedIn – are here to stay, Pikus offers advice to anyone hesitant about using social media: “Social networking is just an offshoot of your real social network, your real people who you talk to, real people who you communicate with. It’s nothing to be intimidated by.” 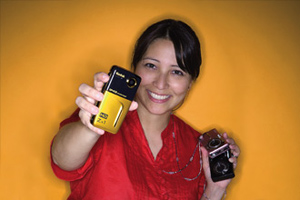 Kodak blogger is a ‘woman to watch’
When Jenny Cisney ’99 (computer graphics design) was named chief blogger for Eastman Kodak Co. in 2008, she likely became one of the first – if not the first person – to hold that title with a major U.S. corporation.

Cisney, who has been with Kodak for more than a decade, uses social media similarly on and off the job.
“Personally, I use social media to share my experiences and stay in touch with friends and family. Our goals for Kodak aren’t very different from those. It’s a great way to share with customers what is going on in the company and hear what they have to say.”

Originally from Orrstown, Pa., Cisney this year was named by Advertising Age magazine one of its “Women to Watch.” Blogging personally since 2000, the corporate world’s first chief blogger advises, “Be transparent and open in what you do, participate frequently, listen and respond.”

Grads make it easy to share and share alike
To a great extent, social media is all about sharing – sharing content, ideas, opinions and updates with friends and followers, customers and prospects. Two RIT alums have made it easier.
Created by a team led by Steve Shapiro ’05 (information technology), digsby.com facilitates the managing of multiple instant-message, e-mail and social-network tools via a single online interface. Part of an entrepreneurship class project, digsby recently surpassed 1.5 million users and has nearly 62,000 Twitter “followers” and more than 23,000 Facebook “fans.”

“The goal was to create a product that helps people save time doing the things they do most online,” says Shapiro, who grew up in Brooklyn and is president of digsby parent company, dotSyntax LLC, based in RIT’s high-tech business incubator, Venture Creations. 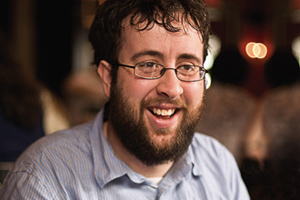 Meanwhile, in McLean, Va., at a subsidiary of Clearspring Technologies, Justin Thorp ’06 (information technology) is the community manager for AddThis LLC (addthis. com), which created a Web-sharing “button” currently used on more than 400,000 sites (including www.rit.edu/news).

Described as an upstart “giant” in online sharing, AddThis was recently featured prominently in an article in The New York Times.

But promoting sociability through technology is only part of his job.

“I say that I make and keep friends for a living,” says Thorp, whose responsibilities include marketing, customer outreach and support, and business development. “I’m one of the warm smiling public faces of the company.”

Keep on truckin’ (and tweeting)
As part of his job as communications manager for the American Trucking Associations (an advocacy group, based in Arlington, Va., that represents more than 37,000 trucking companies), Brandon Borgna ’06 (professional and technical communication) writes for three separate blogs, including BizCentral.org, and he “tweets” on Twitter.

While an RIT student, Borgna, on a co-op with RIT University News, blogged on The Tiger Beat Blog (thetigerbeat.com) – one of the first and only higher-education news blogs focused on giving the “inside scoop,” rather than a more traditional, straightforward news presentation.

“There’s a huge shift towards all things digital and I can’t begin to express how thankful I am to have an education from a tech-centric school like RIT and wonderful exposure to new and social media while working at University News,” Borgna says. “I’ve gone to a few social-media training luncheons at the U.S. Chamber of Commerce, which made me realize that I’m so far ahead of most PR folk around here, and having that background is probably my biggest competitive advantage.”

Jumping in. Figuring it out. Earning a living and having fun. It’s what RIT grads are bred for. (And you can “tweet” us on that.)