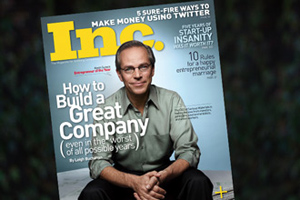 RIT alumnus and Board of Trustees member Kevin Surace is Inc. magazine’s Entrepreneur of the Year.

Surace, a 1985 electrical engineering technology graduate, is on the cover of the magazine’s December issue. “Kevin Surace is on a Roll,” the story proclaims. “His vision: To build the most innovative company ever, make billions of dollars, and save a complacent world from the perils of global warming. By selling windows and drywall, Kevin Surace just might pull it off.”

Surace, president and CEO of Serious Materials, says the recognition came as a big surprise. “It’s the Academy Award for growing companies,” he commented. “It’s truly a testament to the team that is behind me. And this kind of exposure helps raise awareness of what we’re doing.”

Serious Materials, headquartered in Sunnyvale, Calif., manufactures building materials designed to reduce energy usage and CO2 generation in buildings, which are responsible for an estimated 50 percent or more of greenhouse gasses.

“As a leader in clean technology, Kevin is in a position to make an important impact on the problems of global warming and resource conservation,” says RIT President Bill Destler. “It’s gratifying to see that his innovative approach in the area of sustainability is gaining much-deserved attention.”

Surace credits his RIT education with providing a solid foundation for his entrepreneurial ventures. “RIT teaches you how to think, and how to think outside the box. And we put that thinking to work in innovative products and innovative companies that are willing to take risks. My solid education and experiences that I received at RIT have allowed me to take on the challenges of different fields as my career has evolved.”

The Inc. magazine recognition marks the culmination of an extraordinary year for Surace and his company. The company’s EcoRock drywall material was awarded Popular Science’s Green Tech Grand award, was named best new product by Popular Mechanics and received The Wall Street Journal’s Technology Innovation award in the environmental category. The World Economic Forum announced that Serious Materials has been named to the 2010 class of Technology Pioneers. According to WEF, “The 26 companies selected as Technology Pioneers 2010 represent the most innovative start-ups from around the globe that will have a critical impact on the future of business and society.”

Serious Materials purchased and reopened a Chicago window factory, saving jobs and attracting the attention of President Barack Obama, who praised the company during a news conference in March. Additional jobs were saved when the company reopened another closed-down window factory in Pennsylvania.

According to the Inc. article, Serious Materials experienced a 50 percent revenue increase during 2009.

An article on Serious Materials was featured in the Fall 2009 issue of RIT: The University Magazine: http://www.rit.edu/news/umag/fall2009/28_ritworks.php