A New York-based consortium, led by SUNY Polytechnic, Rochester Institute of Technology and the University of Rochester, has been awarded a multimillion-dollar federal investment to create a national photonics center.

The award, issued under the federal government’s National Network for Manufacturing Innovation (NNMI), was announced July 27 by Vice President Joe Biden and New York Gov. Andrew Cuomo at a news conference at a SUNY Polytechnic facility at Canal Ponds in Greece, a suburb of Rochester. The new institute will be called AIM, short for American Institute for Manufacturing Integrated Photonics.

The consortium, which also includes Massachusetts Institute of Technology, University of Arizona, University of California at Santa Barbara and other academic and industrial partners, including Alfred and Columbia universities, was chosen over two other proposals that had also advanced to a final round in a U.S. Department of Defense program to establish a National Institute of Photonics. Championing the New York application, submitted on behalf of the consortium by the Research Foundation of the State University of New York, were Senators Charles Schumer and Kirsten Gillibrand and Congresswoman Louise Slaughter. The federal government has pledged $110 million for the new national institute and New York state has pledged $250 million. 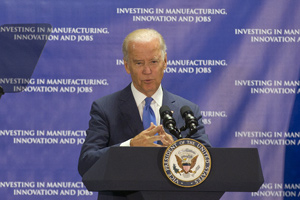 “We applaud President Obama for recognizing the strategic importance of this industry, and choosing the New York state proposal to advance it,” said RIT President Bill Destler. “The Rochester region, with one of the largest photonics manufacturing hubs in the nation, plus academic centers with renowned work in microsystems, imaging science and packaging, is uniquely positioned to make great contributions in this field. We thank Senators Schumer and Gillibrand and Congresswoman Slaughter for their advocacy and leadership on behalf of our application, and we thank Gov. Cuomo for the very significant commitment of state funding that no doubt played a key role in helping us win this proposal.”

Ryne Raffaelle, RIT vice president for research and associate provost, said advanced developments in integrated photonics are essential to the nation’s manufacturing capabilities in such areas as high-speed data and telecommunications. He said technologies developed at this national center would allow for more information to be transmitted far more efficiently.

This is the second major designation of this type for the region. In 2014, RIT was named a core partner in the Chicago-based Digital Manufacturing and Design Innovation Institute and is slated for an investment of up to $20 million.

RIT has contributed to advances in the design, fabrication and manufacturing of electronic and photonic devices for more than 30 years as technology generations have progressed from the micron-scale to the nano-scale.

RIT assets in this area include: