The RIT women’s hockey team is ready to defend its two consecutive College Hockey America championships in 2015-2016. But the program is already celebrating a new milestone this season.

RIT recently announced the Bruce B. Bates Women’s Hockey Coach, the university’s first endowed coaching position for Tiger athletic programs. RIT Trustee Emeritus Bruce B. Bates, who joined the board in 1970, is providing the gift where endowed earnings will support the salary of the women’s head hockey coach and provide budget relief to athletics. 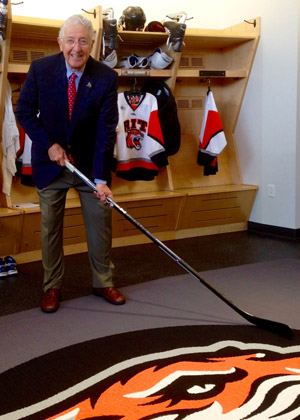 “The women’s team deserves this endowment and recognition for their program,” said Bates, who began playing hockey at age 8 and retired from men’s leagues at 58. “These young women are exceptional student-athletes both in the classroom and on the ice. I am a season ticket holder and enjoy their brand of hockey. This feels good to me. It’s the right place to start for an endowed coaching position.”

The endowment in athletics will be similar to those in academics at RIT. The donation is invested, and a portion of the return is distributed each year. When funded, the endowment will include commitments of more than $1.7 million.

Scott McDonald, who recently signed a five-year extension to lead the women’s hockey team through 2020, becomes the first recipient of the endowment.

“I would like to thank Mr. Bates for his support and most of all, his generosity for our program and RIT Athletics,” said McDonald, the Bruce B. Bates Women’s Hockey Coach. “This is a monumental step for our program. Not only will this benefit our team, but our entire athletics department. I am honored and humbled that Mr. Bates feels that we have earned this generous gift.”

In nine seasons as head coach at RIT, McDonald has an overall record of 186-72-23, including the 2012 Division III National Championship. In three seasons as a Division I program, he has led RIT to two College Hockey America Championships, and in 2015, RIT’s first berth into the NCAA Division I Tournament.

“Bruce Bates’ extraordinary generosity and engagement will have a profound impact on the entire Intercollegiate Athletics program at RIT,” said Sandra Johnson, senior vice president for Student Affairs. “This ‘first’ in our history will support and advance the important role of promoting women in sports and the concept of the scholar athlete. Bruce’s engagement with the program will inspire and energize our community in meaningful and remarkable ways today and in the future.” 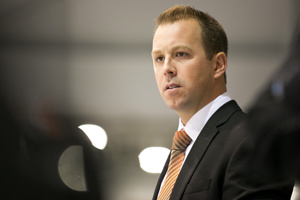 “We are thrilled for our women’s hockey program and for athletics at RIT in general,” added Lou Spiotti Jr., executive director of Intercollegiate Athletics. “This is a landmark event in that it will serve as an impetus for future successes in women’s hockey. We look forward to benefitting from the added financial support, which is obviously critical to building consistently competitive teams. We are grateful for Mr. Bates’ generosity and extraordinary dedication to our student-athletes.”

Lisa Cauda, vice president of Development and Alumni Relations, said the Bates gift is a model for RIT Athletics that may inspire others to support RIT’s other 23 varsity sports.

“As the first RIT donor to establish an endowed coaching position, Mr. Bates is paving a new roadway toward further athletic successes,” said Cauda. “We look forward to helping other dedicated alumni and friends to follow his lead, all in support of our Tiger scholar athletes.”

Bates, a longtime supporter of RIT, said his recent gift is about an emotional connection to the women’s team. He hopes more donors follow suit for other RIT coaches.

“I got involved in a lot of different ways over the years with RIT,” said Bates. “After a while, you get to love a place that tends to think you are OK and gives you opportunities to love them back.”

About Bruce B. Bates