Thousands of first-year Rochester Institute of Technology students are starting their college careers this week. Leading up to the first day of classes on Monday, August 22, freshmen and upper class students will be moving in to residence halls, getting acclimated to campus life, and preparing themselves for a rigorous year of study.

This year’s freshmen class is expected to number 2,660 students, and represents 47 states – plus the District of Columbia, Puerto Rico, and the U.S. Virgin Islands –– as well as 54 countries. The incoming class also saw the highest number of women enrolled at 922 and more than 600 transfer students. 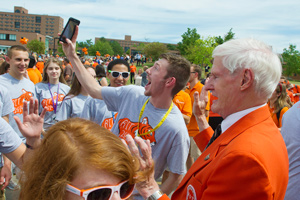 The quality of this year’s class, measured by grade point average, rank in class, and scores from standardized tests, reached an all-time high. According to James G. Miller, senior vice president of Enrollment Management and Career Services, the mean GPA increased from 91 to 92 percent, with 38.2 percent of students coming from the top 10 percent of their class, versus 36 percent last year. Miller said 68 percent of the incoming class is enrolled in the STEM (science, technology, engineering and math) disciplines. Applications for freshman admission also set a record, surpassing the 2015 total by 7 percent. This year also marks record enrollment as a whole for RIT and its global campuses in China, Croatia, Dubai, and Kosovo. RIT expects overall enrollment to approach 19,000 students, with this year’s numbers the highest in RIT’s history, and surpassing the record 18,606 students enrolled last fall. The Rochester campus is expected to approach 17,000 students.