Are we alone in the universe? How does the human brain develop? Can we extend the lives of breast cancer survivors? Can we “see in the dark” and through obstructions to ensure national security? Partners in the Future Photon Initiative hope to develop new photonic devices to pursue the answers.

The following feature story is one of five signature interdisciplinary research areas RIT is current exploring through advanced research. Each of these research areas is reflective of a growing significance in society, and all are endeavors where RIT can make high-impact contributions in the fields.

Photonics is the field of technology that uses photons to process information or energy. Around the RIT campus, significant photonics research already takes place. The Center for Detectors develops next-generation detectors in a facility that rivals that of major space agencies. The NanoPower Research Laboratory designs and fabricates advanced photovoltaic devices. The Integrated Photonics Group is leading the design, fabrication, and characterization of photonic chips. And that’s but three examples. 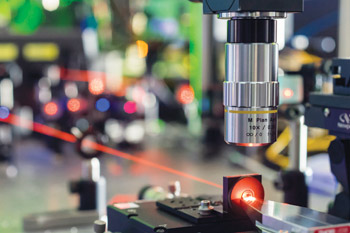 Future Photon Initiative: FPI spans the entire field of photonics from advanced optical systems down to photonic devices of the scale of nanometers. In this photo red laser light is directed into a chip (bottom right) with nanoscale photonic devices.

The Future Photon Initiative (FPI) will leverage RIT’s unique assets to develop advanced photonics, which represents the cutting edge of the field of photonics, with the ultimate goal of becoming one of the most effective applied photon research and development centers in the world.

Don Figer, director of the Center for Detectors, will lead the Initiative. “We’ve always had the idea to bring together the researchers to address the bigger problems” the world faces related to U.S. competitiveness and national security, he said. Initially, FPI will develop devices for advanced manufacturing, communications and information technology, defense and national security, energy, and health and medicine.

Some of those big questions Figer cites: “Are we alone in the universe? What is dark energy and dark matter?” and others listed at the beginning of this article. “The odd thing about these questions is they don’t seem to be related but they all overlap in the technology that’s needed to address them,” according to Figer.

FPI will apply and commercialize the efforts of existing RIT groups that develop technology for the generation, transmission, manipulation, absorption, and detection of photons.

Being awarded $1 million in funding from RIT will provide the resources needed to take the individual research groups and transform them into an internationally recognized Initiative, Figer said.

Key to that is analyzing the areas of expertise that RIT currently has on its research faculty and identifying gaps that exist. Also important is analyzing a list of potential customers (ranging from Fortune 500 companies to the Department of Defense) in order to target opportunities for funding and possible expansion, Figer said.

An assistant director will be hired to be the liaison between researchers and the industry, federal agencies, New York state, and nonprofit organizations. “We think we could significantly increase funding for research,” Figer noted. The most important long-term goal is to obtain funding to create a national photon device center. The total external funding goal for the Future Photon Initiative is $100 million within five years.

This RIT research initiative will be able to capitalize on opportunities, including funding, related to the American Institute for Manufacturing of Photonics (AIM Photonics), a public-private partnership announced in 2015 in which RIT is a Tier 1 academic partner.

“One of the measures of our emergence as international leaders is the strength of the letters of support in our proposal” to RIT for funding the Future Photon Initiative, Figer said. Organizations and businesses such as NASA, the U.S. Army and Air Force, Raytheon, Nikon, Intel, and Harris enthusiastically endorsed the proposal, and in some cases, cited the opportunity to work with or continue to work with RIT.

“A number of our research groups are already working with NASA,” including in the field of infrared detectors, Figer noted. “But NASA has many interests …We can become an entity that could be a think tank for NASA.” The NASA letter of support specifically mentions the potential collaboration on areas such as high-speed lasers and optoelectronics.

FPI will focus on four specific areas for research and development. 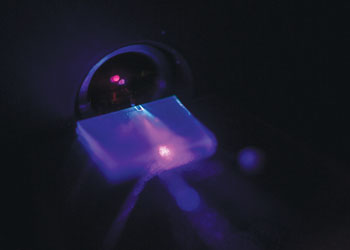 Photonic Chip Operating at Ultraviolet Wavelengths that is being used to realize memories in future quantum computers and communication systems.

Stefan Preble, director of the RIT Integrated Photonics Group, is leading work that integrates photons onto microchips, which will address the key computing, energy, communication, and sensing challenges of the future. Through the FPI, Preble believes revolutionary advances in photon science and technology can be made.

“The goal is to be able to process every photon. Light is made up of photons and it’s very important you don’t lose any of those. You want to get all the information you can from these photons. That’s difficult to do at this point,” Preble said.

A key theme will be the exploitation of the quantum properties of photons and matter to eliminate tradeoffs in speed, efficiency, and noise. “By moving to a quantum-limited regime in the laser, the waveguide, the detector, essentially you’re able to have much higher performance than is possible in classical technology,” Preble said. “As a result that shift helps us to answer those big questions.” 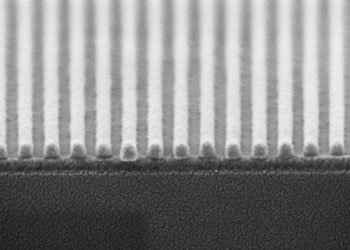 Scanning Electron Micrograph (SEM): Nano-patterning of semiconductor device structures smaller than 25 nanometers is enabled through the advances in deep-UV (DUV) and extreme-UV (EUV) lithography at RIT.

Having the Initiative build partnerships with businesses, consortia, and other academic institutions is key. “More than ever, there are challenges that require thinking about nano-scale devices and process technology in nonconventional ways. Collaborating with groups that are involved with the latest advances is extremely important as we move to new opportunities to communicate with, connect to, and control the world around us.” Smith said. “The current challenges aren’t anything that can be resolved with one single discipline; the goal is to create opportunities to work together.” 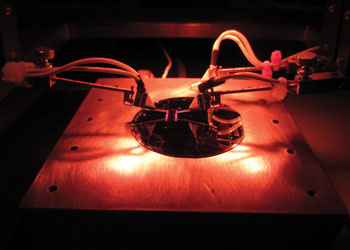 Seth Hubbard, director of RIT’s NanoPower Research Laboratories, has overall responsibility for the energy area of the FPI. The United States and other countries have identified sustaining the energy supply as a high priority, according to Hubbard. His research focuses on photovoltaics, specifically improving the efficiency at which photovoltaics converts sunlight into electricity.

Hubbard, Preble, and Figer already have been collaborating for a number of years, and plans call for a multidisciplinary team of scientists and engineers to develop breakthroughs to advance the state of the art in device efficiency.

While Hubbard has already developed collaborative relationships with a number of businesses over the years as a result of joint government funding, he believes the Future Photon Initiative will give the name recognition to be able to expand that. 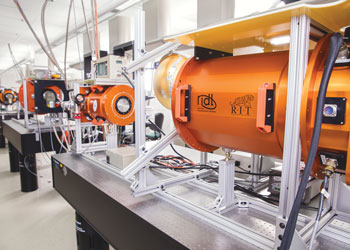 Imaging Detector Testbeds: These high-performance imaging detector testbeds in RIT’s Center for Detectors give the FPI unique abilities to develop imaging devices for use in NASA missions.

Two of the most exciting application areas for detectors are astrophysics and biophotonics, according to Figer, who oversees this area in his role as head of the Center for Detectors. The Center, which is one of the most well-funded astronomical detector programs in the world, is currently leading development programs for both single photon counting detectors and also large format infrared detectors. The FPI will leverage these developments for future astrophysics missions.

In the field of biophotonics, fast low- noise detectors are crucial for the develop- ment of next-generation biophotonic instruments. Ultimately, these instruments can help answer big questions such as how to extend the lives of breast cancer survivors and how to study brain hematomas in infants, Figer said. The Initiative plans to hire a principal investigator faculty member for this area.

Taking the outcomes of research and turning them into viable patents and products is a key goal of the Initiative. Richard DeMartino, director of the Simone Center for Student Innovation and Entrepreneurship, believes the commercialization of research coming out of RIT can be magnified to a much greater extent. “I think we have just scratched the surface of what we can do when it comes to taking photonic technology and building a business around it,” he said. As a former board member of the Rochester Regional Photonics Cluster and the author of several journal articles on commercializing photonics, DeMartino is well aware of the opportunities.

While several companies, most notably Pictometry, have been spun out from imaging science and photonic research at RIT, DeMartino noted that often in academia this process of exploring commercialization opportunities isn’t built in systemically. That won’t be the case for the Initiative.

Researchers will take advantage of the fact that RIT is an Innovation Corps (I-Corps) site designated by the National Science Foundation. I-Corps is a public-private partnership program that teaches grantees to identify valuable product opportunities that can emerge from academic research, and it offers entrepreneurship training to participants.

“This is a process that is specifically developed for science and technology where they work with scientists and coaches to help them understand the commercial value and push forward commercial opportunities,” DeMartino said.

Teams that have developed a photonic-related output will participate in the I-Corps program. Through seminars and meetings with coaches, Future Photon Initiative researchers and students will “explore if there are real customers for what they have and see if there’s a business that can be developed from that,” DeMartino said.

The Vignelli Center for Design Studies is collaborating with the Initiative to create an effective communications strategy.

“We have expertise that can help this initiative in terms of establishing a coordinated, integrated, visual communications program,” said R. Roger Remington, Vignelli Distinguished Professor of Design.

Remington will work with Figer and the FPI colleagues. “The first phase we’ll be involved with will be a phase of analysis and fact finding, and that will lead us to the place of trying to develop some specific strategies for the Initiative’s terms of communicating to its audiences and having a new face to use for internal and external publics. And then once we have a consensus on a direction with this, we will begin to work with them in terms of specific applications such as websites and promotional literature.”

A team of 16 researchers and professors currently make up the FPI, and the excitement is palpable.

“Each of us has been trying to grow our reputation for the last 10 years,” Hubbard said. “You get hired to the faculty and you start growing your reputation nationally and internationally in a very specific field. Now that we can bring all of us together, I feel that the whole is better than the sum of the parts. So we can have a very strong Initiative that’s recognized in many different fields such as solar energy to detectors to integrated photonics to bio-device industries. It’s a huge swath. We can get increased name recognition with this Initiative.”