Make the Rink Pink a Success 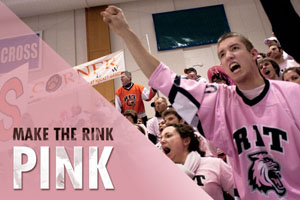 Rochester Institute of Technology hockey fans traded orange apparel for pink over the weekend and in the process raised $21,248 to fight cancer.

“Being a part of ‘Make The Rink Pink’ was such a fun and exciting experience,” says Amy Perazzo, president of Zeta Tau Alpha. “It is the first event ZTA has hosted with RIT’s hockey teams and hopefully will not be the last. We were so happy with the turnout and pumped to see everybody decked out in pink.”

The fundraiser, drawing more than 3,000 fans for both games, also served as an example of the partnership between RIT and Rochester General Health System. The institutions created a strategic alliance in 2009.

“We are so grateful that the RIT Hockey program is supporting the Lipson Cancer Center with this unique and exciting event,” says Eric Shoen, director of gift planning at Rochester General Foundation. “It’s the latest example of how the strategic alliance between Rochester General and RIT is blossoming into something special for our community.”

“I thought this was a great event where the entire RIT community and Rochester General were able to work together for a great cause,” adds RIT men’s hockey coach Wayne Wilson. “It was great to see Zeta Tau Alpha work together with the men’s and women’s team to benefit cancer research. Without the general student body, faculty and staff along with our RIT hockey fans we could have never exceeded the goals we set out to accomplish. Thank you everyone.”

For more information related to the fundraiser, visit www.rit.edu/pink.