A Force on the Ice 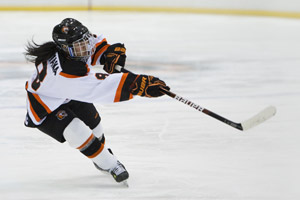 The landscape of RIT athletics in 1975 included football and very few women’s varsity teams. But that didn’t stop a group of pioneering ladies from lacing up ice skates and playing  recreational hockey.

It wasn’t glamorous. Their ice time began at 11 p.m. The club had to buy their own jerseys and equipment.

“We did not win any games the first two years, but we had a lot of fun playing hockey,” recalls Sheila Stevenson ’79 (graphic communication). “We practiced and played hard and were committed to the program.”

Fast-forward 35 years. With the lights dimmed, and Survivor’s Eye of the Tiger blaring throughout Ritter Arena, 21 women from all regions of North America take the ice with one mission in mind: a national championship. In the past four seasons, the RIT women’s hockey program has skated its way to national prominence as one of the premier collegiate programs in Division III.

“With the success we’ve had, and the talent on this team, the goal every season now is to make the NCAA tournament and make a run at the national championship,” says RIT Head Coach Scott McDonald.

All eyes on Division I

RIT women’s hockey is well positioned to move to the NCAA Division I level, according to President Bill Destler and Lou Spiotti, director of athletics.

RIT has 24 varsity sports and all but men’s hockey compete at Division III. The men’s team jumped to the more competitive Division I level in 2005.

For now, the women’s team will have to wait. The NCAA put a moratorium into effect in 2007, forbidding teams from moving up or down until August 2011 at the earliest.

“We certainly would like to take the program to the Division I level,” says Spiotti. “It would pair nicely with the men’s program and create more energy around hockey in general. Our plans are to do just that.”

But it’s not just about winning. The team is an eclectic group of student athletes who, for nine months a year become a sorority—eating, practicing, studying and traveling as a cohesive unit.

“We hang out a lot off the ice,” says Amy Torgerson, a psychology and management double major from Owatonna, Minn. “You have to have a close knit group to be successful, which we have.”

Despite different backgrounds, the players share a passion for the game. Several of the women credit family members as inspiration for learning to play hockey at an early age. Some were figure skaters before switching to hockey.

Criminal justice major Amanda Klassen of Winnipeg, Manitoba, had a different take: “I grew up a huge Winnipeg Jets fan and loved the movie The Mighty Ducks. Right around when the movie came out, I went to an Anaheim Mighty Ducks-Jets game in Winnipeg. It was a high scoring game and there was a huge brawl. I was hooked from there.”

“RIT is a place that creates an international appeal,” says Lou Spiotti Jr., director for the Center of Intercollegiate Athletics and Recreation. “Our women’s hockey team epitomizes this ideal.”

Ariane Yokoyama, from California, explains her reasons for traveling across the country. “I came to RIT because it is a really competitive Division III program. I also wanted to study ultrasound, and it was the only four-year school with a good hockey team.” 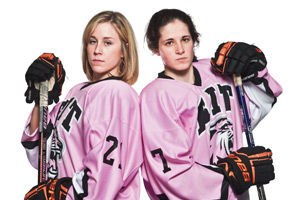 Captains Sarah Dagg, left, and Missy Hall don pink jerseys showing the team’s support of breast cancer awareness. The jerseys were worn during a game and auctioned as a fundraiser for the cause. 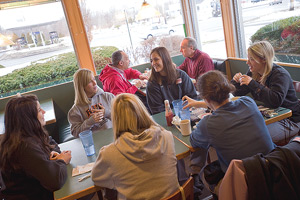 Team members also enjoy spending time together off the ice. One morning, the women gathered at one of their favorite restaurants, Margie’s, for breakfast. 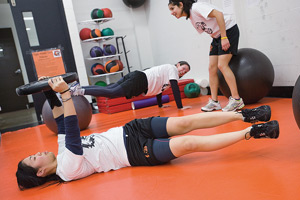 Keeping in peak condition off the ice is crucial as the women face the nation’s top competition. 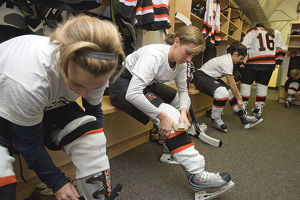 The women begin to suit up in the locker room an hour before game time. Mental preparation proves just as important as physical conditioning. 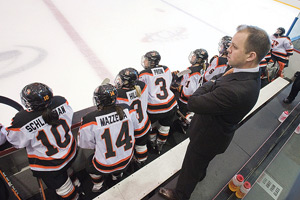 Head Coach Scott McDonald takes his place behind the women’s bench. McDonald was one of the driving forces behind the men’s hockey team’s move to Division I—and plans to lead the women’s team in the same direction.

McDonald, a native of Oakville, Ontario, is committed to finding not only the best players, but good people as well.

“We look for the best players who fit our ’team-first’ philosophy and can be successful students,” says McDonald, who is in his fourth year of coaching. “I try to get high-energy players who are not afraid to work hard and are able to adjust to the rigors of RIT’s academic programs.”

The Tigers have improved steadily in the classroom; the team’s grade-point average moved past the 3.0 mark for the first time in five years. Missy Hall, co-captain, and industrial and systems engineering major from Chesterland, Ohio, believes that her experience at RIT has helped  prepare her for life after hockey.

“I think being a collegiate athlete, as well as a future RIT graduate, gives me a big leg up in the world,” says Hall. “In my co-op interviews, I have learned that companies really love hiring athletes because they know that we are self motivating, can handle adversity and are good communicators.”

The success of this team begins with McDonald, who helped RIT’s men’s program make the leap from Division III to Division I in 2005 as an assistant coach. His success with the women’s program is no surprise to RIT men’s head coach Wayne Wilson.

“Scott is a really good coach who comes from a great hockey background, so his success is no surprise,” says Wilson. “He has a real commitment to excellence and wants and gets great players, but he also has a good instinct to get good students—and even better people.”

When McDonald took over as head coach of the RIT women’s program in 2006, it was expected that there would be a rebuilding process.

“I wanted to come in and build a foundation centered around hard work and a good team atmosphere,” says McDonald, who has won 80 percent of his games. “I wasn’t really focused on wins and losses.”

The following season, RIT moved to the ECAC West with perennial powers Elmira College and SUNY Plattsburgh, teams that combined to win four national championships in the past eight seasons. The Tigers placed second in the ECAC West standings, while defeating Plattsburgh, the defending national champion. Last season, RIT’s program reached new heights, jumping to number two nationally during mid-season. The Tigers won 21 games, including wins against Division I foes. RIT also defeated three No. 1 teams during the season.

With another strong start this season, the Tigers continue their climb as one of the nation’s elite teams.

“When I heard Scott would be the head coach (at RIT), I knew it was only a matter of time before they would be perennial contenders,” said Dave Clausen, head coach at ECAC West rival Utica College. “RIT has a wealth of talented players whose skill combined with Scott’s direction, foreshadow a long run for them as a Division III power.”

Stevenson, a former RIT Tiger and now a sports information director at Rowan University in New Jersey, looks back fondly at her RIT years and is proud of the program’s ascent.

“I follow the team on the RIT Athletics Web site,” she says. “The rise of the RIT team can be credited to the dedicated athletes and coaches that have been a part of the program over the years. I look for more NCAA appearances from the team and for them to go deeper into the postseason.”