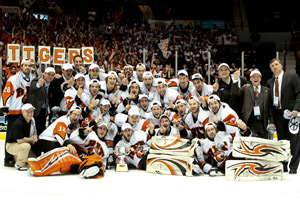 Tigers advance to the NCAA Tournament for the 14th time in the last 28 years. Denver is the No. 2 team in Division I

For the first time since moving to Division I in 2005, the RIT men’s hockey team (26-11-1) will be one of just 16 teams to compete in the 2010 NCAA Division I Tournament. RIT, who earned the NCAA automatic berth by winning the Atlantic Hockey Tournament, will play Denver University in the East Region Semifinal at the Times Union Center in Albany, N.Y. on Friday at 3 p.m. The game will be aired live on ESPNU with John Buccigross and Barry Melrose bringing you all the action.

RIT is the No. 4 seed in the region, while Denver (27-9-4) is the top seed. Denver, who plays in the Western Collegiate Hockey Association (WCHA) is the No. 2 overall seed in the NCAA Tournament and boasts 14 NHL draft picks. Cornell (21-8-4), the ECAC Champion, is No. 2 seed in the region, and will face No. 3 New Hampshire (17-13-7) of Hockey East in the second regional semifinal on Friday at 6:30 p.m. The two winners will face-off in the East Region Championship on Saturday at 6:30 p.m.

"Denver is an extremely talented team with great size, they skate well, and were the top team in the nation for most of the year," said RIT Head Coach Wayne Wilson. "They are a very deserving top-seed in our region."

RIT is the hottest team in the nation, having won 10 straight games. The 26 wins are a team record at the Division I level, and third most in the nation this season. RIT is among the national leaders in scoring offense, scoring defense, and power-play percentage.

The Tigers have enjoyed a storied legacy, as a national power at the Division II and III level, and seems poised to enter that same echelon at the Division I level. RIT will be making its 14th trip in the last 28 years to the big dance, and first since the 2001-02 season.

RIT joins Bemidji State and Minnesota State (formerly Mankato State University) as the only NCAA teams to compete in the NCAA Tournament at the Division I, II, and III levels.

“To win the AHA Tournament and get to the NCAA Tournament is a culmination of all the players that have come before all the way back in the Division III days,” said Wilson. “RIT has a great hockey tradition and this is another step in that tradition.”