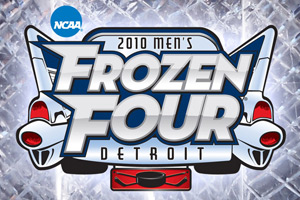 The RIT men’s hockey team is one step closer to a national championship. The Tigers are heading to Detroit to play in the NCAA Frozen Four April 8–10. The Tigers and the University of Wisconsin Badgers will battle in a semifinal game beginning at 5 p.m. April 8.

RIT Sportszone is in Detroit tailing the Tigers as they prepare to take the ice in their first Frozen Four since moving to Division 1.

Sophie Schillaci and Kevin Roche bring you interviews, press conference coverage and inside stories from Motown.

Is there a triple crown in college hockey?

Now, RIT is at the Division I level and the Tigers are up against college hockey’s elite programs in the 2010 NCAA Frozen Four.

The Tigers have built a winning tradition since the program’s inception in 1962. Along with the two national titles, RIT has appeared in the NCAA Tournament 14 times, including eight Final Four appearances and three appearances in the finals.

To follow the Tigers, visit www.ritathletics.com or become a fan at www.facebook.com/RIThockey.

If you can’t make it to Detroit, join RIT alumni for a Frozen Four viewing party.