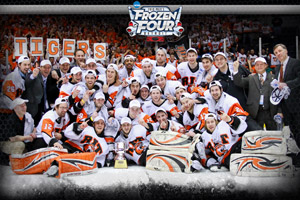 An exhilarating run—a run that captivated both a campus and a community—came to an end Thursday night at Detroit’s Ford Field.

RIT’s men’s hockey team, making its first Division I NCAA Tournament appearance, suffered an 8-1 defeat at the hands of the Wisconsin Badgers in the semifinals of the Frozen Four.

The Badgers scored twice in the first 10 minutes of the first period to take an early lead, sucking the magic—and perhaps the spirit—out of the underdog Tigers. Wisconsin buried four more pucks into the RIT net in the second period, essentially ending any hopes of a comeback.

RIT Sportszone was in Detroit tailing the Tigers as they prepared to take the ice in their first Frozen Four since moving to Division 1.

Sophie Schillaci and Kevin Roche bring you interviews, press conference coverage and inside stories from Motown.

“We ran into a powerhouse tonight,” says RIT Head Coach Wayne Wilson. “They had an answer for everything we did. They were physically stronger and quicker than we were.”

This lopsided loss, one that undoubtedly stunned a collection of student-athletes who had previously proven they could play with the nation’s best, will not be the legacy of the 2009-2010 Tigers.

Much of that legacy was written prior to Thursday night’s game. A portion was scrawled March 20 in the Blue Cross Arena when the Tigers finally climbed to the top of the Atlantic Hockey Association and earned its NCAA bid. Another chunk was etched two weeks ago in Albany when the Tigers leapt into the national spotlight by knocking off powerhouses Denver and New Hampshire to claim its spot in the Frozen Four.

Those wins sparked an unprecedented spike in school spirit. Hundreds met the team bus, which returned from Albany at 2 a.m., for a wild celebration. RIT apparel flew off the racks at Barnes & Noble, the official university bookstore. A series of spirit events were attended by people from across the campus and Rochester communities.

“I’ve never seen anything like this,” says Mary-Beth Cooper, RIT’s vice president for student affairs. “The atmosphere on campus has been electric. Hockey fans, non-hockey fans and even those who aren’t affiliated with RIT fell in love this team.”

That emotion is something the Tigers will never forget.

“It gave us a lot of energy. It was great to get that kind of support,” says RIT senior goalie Jared DeMichiel. “We’ve always received support, but I had no idea how much we meant to the school.”

Much of this squad’s legacy, however, is still to be determined.

The unprecedented campus and community interest in RIT hockey has magnified the program’s need for a new hockey arena. RIT administrators have confirmed the need and will investigate the possibility of constructing a new facility.

The program’s presence in the Frozen Four, the most prestigious college hockey tournament in the country, will surely bolster Wilson’s recruiting efforts. And the team’s success, which resulted in news stories in dozens of major news outlets across the country, has strengthened the prestige and name recognition of the entire university.

“The past few weeks, and what this team has accomplished, is about what RIT can become,” says Cooper.