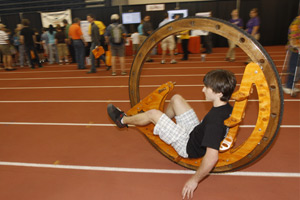 Paul Richard shows off a monowheel during the third Imagine RIT: Innovation and Creativity Festival. Richard teamed with a group of students in RIT’s Engineering House to construct the vehicle.

For the third consecutive year, the RIT campus swung its doors open to the community as part of the Imagine RIT: Innovation and Creativity Festival. And more than 32,000 spectators turned out to discover what its students, faculty and staff were able to come up with this year.

They didn’t leave disappointed. Eighty percent of the more than 300 interactive exhibits, demonstrations and live performances that spanned the campus on May 1 were new to this year’s festival. “It feels like we’re at Disney World,” one spectator was overheard saying.

The Gordon Field House and Activities Center again served as the festival’s epicenter. Spectators had their faces transformed into 3-D computer images by the Homemade 3-D Scanner for Scanning Faces. They learned that the hotel industry could become more sustainable by adapting the “Perfect Pouch,” a water soluble shampoo and soap package. And they were struck by the wonder of black holes.

As visitors ventured outside of the Field House, they were greeted by traditional festival-fare. Children played on inflatables and the crowds were wowed by the return of the Strongman Competition, where RIT students pulled old cars and lifted heavy weights and tires.

An added attraction this year was the Center for Student Innovation, which first swung its doors open at last year’s festival. Here, visitors took virtual tours on an iPad and witnessed the electric sparks that emerged from a student-built Van de Graaff generator.

“It was a great day for RIT,” says Imagine RIT Chairman Barry Culhane. “It was great to have so many community members, many of them K-12th grade students, join us and see all of the innovative and creative talents that exist on the RIT campus.”