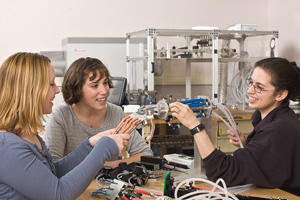 As one of only a few females in her civil engineering technology classes since her arrival at RIT four years ago, Mel Miller has successfully navigated the academic landscape. Miller and many of her female peers at RIT are dismantling gender stereotypes despite being one of only a handful of young women in some of the most demanding fields of science, technology, engineering and mathematics—the STEM disciplines.

“Not many people know what civil engineering is all about,” says Miller who sees the field’s multiple opportunities. “As long as the girls can handle being in a male dominated field, and aren’t afraid to get a little dirty, they don’t have to love it, but they need to be able to do it.”

Engineering, science and math, as disciplines, have expanded their reach into the biomedical arena as well as sustainability. Students in the RIT programs, regardless of gender, are finding that they can pursue science and technology and contribute to society, and this too contributes to women’s success in the STEM programs.

Katelyn Cerankosky, a third-year mechanical engineering student, chose engineering because she wanted to be able to improve the world around her. She has also been one of the few young women in her classes since she enrolled but has not found the experience detrimental. “There have been a few occasions where I’ve been talked down to or told my opinion doesn’t matter because I am a girl,” she says. “I firmly believe that if a woman comes into any STEM program with confidence and her head held high, she will be able to conquer all that comes her way.”

Not only are some of the young women at RIT in one highly intense discipline, they are often conquering dual degrees, like Kursten O’Neill and Irem Gultekin. O’Neill, a fourth-year student, is pursuing a bachelor’s degree in mechanical engineering and a master’s degree in public policy. Like many college students, she learned early on to multi-task. She is a supplemental instructor for freshman calculus, participates on the swimming and diving team and is on the RIT Formula SAE Racing Team, specifically part of the composites group and public relations team.

“Science has a very logical way of explaining the world around us. This appealed to my logical mind; in fact, I can appreciate the science behind the boiling of water more than an abstract painting by Picasso.”

As a fourth-year computer engineering and computational mathematics student, Irem Gultekin crosses two STEM colleges, engineering and science. While growing up in Istanbul, Turkey, Gultekin wanted to become an artist, yet also had an interest in computers.

“It is obvious that my major choices are not typical paths that female students take. I heard that I needed to work harder and needed to give up my social life if I really wanted to be successful,” she says. Gultekin balances the rigors of academics with campus activities as varied as the RIT/NTID Dance Company, track and field and as a member of the President’s Commission on Women at RIT.

She was never uncomfortable being one of only a few women in classes. “There is always a chance to get discriminated in society when you are different; this can cause some people not to go for their dreams,” she says. “But when you give it a chance and be a strong woman, nobody can get to you.”

Having access to interesting classroom  experiences and state-of-the-art laboratories in college to build a portfolio of research can go a long way in encouraging young women to pursue doctoral degrees, the path to advancement in industry research or academia. Couple these experiences with strong mentors, and success rates, including retention and graduation, improve.

“Our current research hypothesis is that engineering colleges that require workplace or co-op experiences in engineering will see higher levels of efficacy for women compared to males. Even before we had our active women in engineering initiative through WE@RIT, we had a 10 percent higher retention rate for females than for males,” says Margaret Bailey, professor of mechanical engineering. She also is the co-principal investigator of a National Science Foundation Pathways grant focused on the relationship between co-op or work experiences and efficacy for both females and males in engineering programs. In the last several years, she has noted trends that lead to her hypothesis that participation by young women in these work programs is a positive factor in retention and persistence.

“Given the reality that you are one of the only women in your organization, you may have to work harder to find advice-givers,” she adds. “There’s nothing wrong with asking for guidance. While men may not put the label ‘mentor’ on their working relationships within male-dominated fields, women in those same fields need to be more intentional in how they will build similar intellectual capital that mentors can provide.”

STEM programs are very competitive. It requires strength of mind—in fact, a sense of adventure—to veer away from the traditional course, which few women are able to accomplish in the absence of external support, says microsystems engineering doctoral candidate Archana Devasia.

RIT student successes are the result of quality over quantity

Today’s female students are dismantling gender stereotypes in some of the most demanding fields of science, technology, engineering and mathematics—the STEM disciplines.

At RIT, just over 33 percent of the student population is female, well below the national average. For the first time in several years, young women outnumber men in college. Women today receive 62 percent of college associate’s degrees, 57 percent of bachelor’s degrees, 60 percent of all master’s degrees, half of all professional degrees and just under half of all Ph.D’s, all significant improvements from 30 years ago.

RIT rivals its peers, graduating the third largest number of STEM graduates among private universities. While the actual number of women at RIT is small, the few that have come through the doors achieve higher GPAs and graduate at higher rates than their male peers. And while recruitment of middle- and high-school age girls for STEM programs continues unabated across the country, RIT seems to be a place, that when the young women do arrive, they remain and they excel.

These young women can be described as adrenaline junkies and gear heads. They understand if you want to be an environmental manager, you have to be okay with getting dirty. They can be found in the Formula cars they’ve helped build, the environmental management projects they’ve led and in some of the most renowned technical laboratories in the country researching photovoltaics.

“As a kid I was always interested in science, especially chemistry and physics. Science has a very logical way of  explaining the world around us. This appealed to my logical mind; in fact, I can appreciate the science behind the boiling of water more than an abstract painting by Picasso,” she says.

“Traditionally women in engineering in India have steered clear of core disciplines such as electrical, mechanical or civil engineering and even those with degrees in these fields have switched to software engineering,” says Devasia. “Since my major deals with microelectronics, I have enjoyed my lab experience. RIT has an excellent semiconductor fabrication facility where I spend roughly 80 percent of my school time. My exposure to high-tech tools, several of which are similar to the ones used in industry, has bolstered my confidence in my work,” she says.

Devasia’s adviser, Santosh Kurinec, professor of microelectronic engineering, is one of the leading researchers in the area of photovoltaics and semiconductor devices. She advises Devasia and several other doctoral candidates, offering students opportunities at Brookhaven Labs, one of the premier laboratory facilities in the United States focusing on silicon cell processing initiatives.

“I think most women have this notion that engineering is a man’s world and are slightly intimidated by the ratio of males to females,” says O’Neill, “but it is important to remember that those women who work hard and succeed in engineering are usually the women who end up changing the world.”

“Science has a very logical way of explaining the world around us. This appealed to my  logical mind; in fact, I can appreciate the science behind the boiling of water more than an abstract painting by Picasso,” says Devasia.