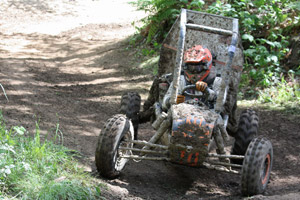 Final exams may be over, but the RIT Baja car’s biggest test is just ahead at the 2010 SAE Baja Rochester World Challenge, one of the most demanding competitions of the year. Event officials confirm that conditions for the off-road challenge are exceptional, with the roughest terrain to navigate, some mud thrown in for good measure and, this year, a water obstacle to separate the best from the also-rans.

The RIT team will both host and compete in the event June 11-13 on campus and at the Hogback Hill Motocross Track in Palmyra. Nearly 100 university Baja teams will travel to Rochester for the event.

“RIT hosted this event back in the early 1980s when it was much smaller. Most of the activity for the first event took place at Liberty Hill,” says Marty Gordon, event  organizer for three of RIT’s four Baja competitions. “Our events have historically been the highest-rated, best-run Baja events. This year has been especially challenging because we want to keep up our great reputation.”

The water feature, added to this year’s course challenge, is not always a part of the competition. But when it is, it attracts some of the best teams on the circuit.

“We are laying out a track through the water that will include some curves and straight-aways,” says Marca Lam, a member of the Baja planning team and instructional faculty in RIT's Kate Gleason College of Engineering. “The biggest obstacle will be to get the car out of the water without help. This means it needs to have enough clearance for the wheels to grab the ground without the body getting stuck on the ramp.”

Baja cars that are lightweight and durable seem to do the best in the overall competition, Gordon says. Perennial champion Ecole Technologie du Superieure from Canada will be the team to beat in the water event, as will regional competitors Clarkson University and Cornell University.

The RIT team believes it can hold its own in the competitions, says Nick Liotta, a third-year electrical engineering student and project manager for this year’s Baja team. “We have a great car, Tiger One, and a very competitive group.”

Baja team members, like their Formula race car team counterparts, are engineering and engineering technology students primarily, but also include participants from liberal arts and graphic design. “Anyone can join the team,” says Liotta. “Just show up in the shop, and we’ll take care of the rest.”

Each team builds component parts of the cars from chassis to electronics. During competitions, all cars undergo a meticulous inspection process and are judged on frame structure, suspension, workmanship and appearance. The next series of competitions are the dynamic events that include hill climbs, water maneuverability, suspension and traction, land maneuverability and acceleration. The competition concludes with a head-to-head, four-hour endurance race.

“Expect lots of high-energy activity and team drama,” Gordon says of the weekend event at RIT and the Hogback Hill track. “Some teams will be lucky to make it around the challenging course once. Top teams will be racing until the checkered flag drops at the four hour mark.”

And RIT’s Tiger One car looks to be on the leader board when the flag drops.

Marty Gordon is the man behind the wheel of the two international events that have taken place at RIT and the one on the horizon in June. In 30 years worth of events, cars, and student-designers, Gordon has seen his sport grow and expectations for the RIT team run high.

“It is very interesting to see how well, or not well, the teams work together,” says Gordon, associate professor in the College of Applied Science and Technology. “This is a high-energy, intense activity taken very seriously by the participants. What makes this so appealing to the student-designers, planners and fans? It’s a lot of fun and you can learn how to apply classroom knowledge in a real-life setting. I get a kick out of watching the excitement of the participants, and I also enjoy seeing many former RIT Baja members and alumni come back to RIT to help run the event.”

The planning committee consists of 30 people, and there will be more than 100 volunteers working during the event. Nearly 700 participants are expected from across the United States, Canada and around the world.

“I think the students really want to recapture the Mike Schmidt Iron Team Award—an award given to the top overall performer in all three North American Baja events,” says Gordon. “This national award is presented in memory of Mike Schmidt, an original member of the RIT Baja team who was killed in an auto accident in 2001. This year will mark the tenth time the award has been given. RIT has not captured the award since 2002.”

Through Baja competitions, the team has been able to expand RIT’s national and worldwide reputation by both hosting and participating in Baja events, Gordon adds. “I’ve met countless RIT students from around the world that first found out about RIT because of Baja. Interestingly, not all of these students are on the Baja team, but Baja put the thought of attending RIT  in their minds.”