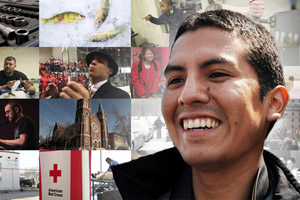 Oscar Durand, a 2009 graduate of RIT’s photojournalism program in the College of Imaging Arts and Sciences, has gained some international exposure and awards.

A video piece highlighting Michael Polimeni, a second-year RIT student and a conductor of RIT’s Pep Band, earned Durand an Award of Excellence from College Photographer of the Year’s photography contest. Durand submitted the video in the individual multimedia story or essay category. There were a total of 16 categories for which student photographers were eligible to submit entries. More than 600 students from 130 colleges and universities entered work into the competition.

Durand, a native of Lima, Peru, also won best photo and earned first place in Photographer’s Forum magazine’s 29th Annual Spring Photography Contest for an image from a series he photographed about migrant workers. While a student at RIT, Durand spent six months documenting the lives of Mexican migrant workers on a cabbage farm in Waterport, N.Y. Photographer’s Forum published the photograph and Durand won $2,000 and a camera.

“It’s great to have your work recognized,” says Durand. “ I think the image goes beyond just being a pretty picture with vivid colors. It shows the human condition, and how much these men work each day in the fields.”

To see the photo series and more of Durand’s portfolio, visit www.oscardurand.com.

Durand is currently at the St. Louis Post-Dispatch for a multimedia internship. He completed an internship at The Dallas Morning News in the fall of 2009.

“The internship at The Dallas Morning News was very challenging,” says Durand. “It was great. The standards at the newspaper are really high. I worked hard. When you are around so many great photographers, you get inspired and they give you feedback and push you to get better.”