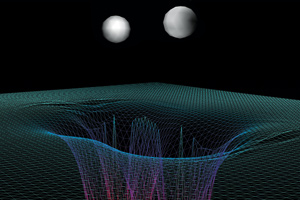 Back to the Beginning
How can we see the universe without using light? A new generation of scientists is working to use gravitational waves—ripples propagating through space and time—to learn about the darkest objects in the cosmos—colliding black holes—and perhaps solve mysteries buried deep in the history of the universe.

Scientists at RIT’s Center for Computational Relativity and Gravitation (CCRG) are busy smashing together black holes and neutron stars on supercomputers to see what gravitational waves might look like. Other scientists in the lab are adding electromagnetic fields and matter to the scenario to mimic nature. And while most of the researchers in the center are simulating gravitational waves, one scientist in particular is analyzing actual data collected by an international collaboration chasing gravitational waves. Together, the CCRG group is producing a body of groundbreaking research in computational astrophysics and numerical relativity, a specialized research field that uses supercomputers to solve the equations in Einstein’s theory of general relativity. 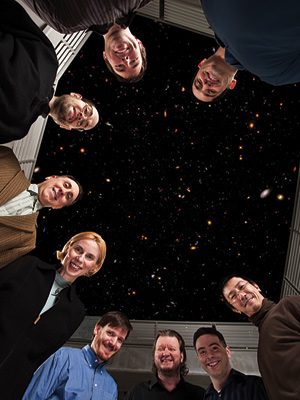 The Center for Computational Relativity and Gravitation
Dr. Manuela Campanelli, director of the center and associate professor of mathematical sciences, arrived at RIT with noteworthy accomplishments to launch and lead the center. At a scientific meeting two years prior, Campanelli and her collaborators Dr. Carlos Lousto and Dr. Yosef Zlochower made an announcement that would put gravitational wave observation closer into reach. They had, for the first time, simulated the merger of two black holes on a supercomputer, solving the 10 interrelated equations for strong field gravity that comprise Einstein’s famous theory of general relativity connecting matter, space, and time.

The simulation of gravitational waves from black hole collisions serves as a critical step toward verifying Einstein’s theory. That essential breakthrough, sought for decades, hinged on a fresh approach to solving Einstein’s equations and the development of sufficient computing power to handle the complex mathematics.

Campanelli’s team, then at the University of Texas at Brownsville, was one of two independent groups of scientists to solve the decades-old problem. The moving-puncture approach, introduced by Campanelli’s team, led to the discovery of enormous gravitational-radiation recoils or “kicks” from spinning supermassive black holes, close to 4,000 km/s, or nearly one percent the speed of light.

The CCRG was founded in the School of Mathematical Sciences in January 2007, then headed by Dr. Sophia Maggelakis, with five initial members: Campanelli, Lousto, and Zlochower of the School of Mathematical Sciences; Dr. David Merritt of the physics department; and Dr. Hans-Peter Bischof of the computer science department. In three years, the center has doubled in size and has brought in $3 million in research funding from NASA and the National Science Foundation. The center focuses on five well-defined research areas: gravitational wave detection, numerical relativity, galactic dynamics, high-performance computing, and scientific visualization.

Making Waves
Scientists are intrigued by gravitational waves for their ability to pass through the same matter that blocks light, or electromagnetic radiation—the focus of conventional astronomy.

“That’s not the end goal; it’s the beginning of initiating the field of gravitational wave astronomy. Almost all of the information we get about the universe comes from collecting photons, collecting light in the form of visible light, radio waves, gamma rays, anything along the electromagnetic spectrum. The idea of gravitational waves is that we’d open up a whole new spectrum of waves propagating at the speed of light.” 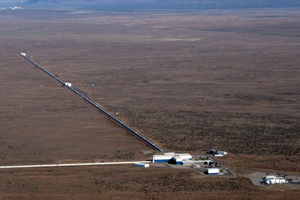 Detecting Gravitational Waves: The LIGO Hanford Observatory, located in the Washington desert, is part of a network of ground-based detectors working in unison to detect and measure the form of gravitational waves. Scientists are using simulations of gravitational waves provided by researchers at the Center for Computational Relativity and Gravitation as blueprints to sift through the “noise” in LIGO’s data. 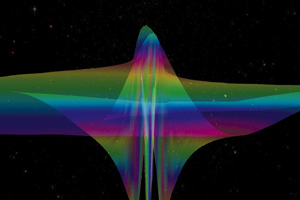 When Black Holes Collide: The collision of two black holes generates gravitational waves—distortions in the curvature of space-time—that travel at the speed of light and hold clues to the origin of the universe. The simulated gravitational wave in this image was emitted by two colliding black holes. The height and color indicate the amplitude of the wave.

The scientific collaboration supporting the Laser Interferometer Gravitational Wave Observatory (LIGO) expects to measure actual gravitational waves for the first time within the decade. Scientists like Whelan will compare real waves coming from space with simulations generated by his colleagues at CCRG and other centers contributing to LIGO. RIT is among the nearly 60 institutions that comprise the LIGO Scientific Collaboration.

LIGO, operated by California Institute of Technology and Massachusetts Institute of Technology, uses ground-based laser interferometers with four-kilometer arms to measure the geometry of space time and look for gravitational waves. The National Science Foundation-funded project consists of two separate observatories—one located in Livingston, La., and the other in Richland, Wash.—that work in unison to search for gravitational waves, such as those produced in binary black hole coalescences. Also participating in the worldwide network are the three-kilometer VIRGO interferometer near Pisa, Italy and the GEO-600 interferometer near Hannover, Germany.

The initial configuration of LIGO, which began scientific operation in 2002 and reached its design sensitivity in 2005, continues to collect data. Those data are being analyzed to search for gravitational wave signals. The observatories are scheduled to go off-line later this year to begin a major upgrade. Advanced LIGO, a more powerful instrument, will be sensitive to black hole mergers occurring as far as 7 billion light years away, whereas initial LIGO has a range of only 500 million light years.

“Advanced LIGO will be able to detect distortions one-tenth as large as initial LIGO and the volume of space we’ll be able to see is 1,000 times as large,” says Whelan. “The significance of being able to see mergers occurring farther away is that we have a greater volume of space to observe, and the odds of an event occurring within that volume are a lot higher.” A complementary gravitational-wave seeking initiative is the future space-based telescope, the Laser Interferometer Space Antenna (LISA). The probe is a NASA/ European Space Agency mission designed to fish the universe for gravitational waves with lower frequencies and longer wavelengths than LIGO. LISA is expected to launch at the end of the decade. NASA/ESA’s Pathfinder space probe, a technology proof-of-principle mission, will confirm LISA’s capabilities in the next few years.

World Leaders
In a November 2007 interview with Discover magazine, well-known theoretical physicist Kip Thorne—a driving force behind LIGO—points to Campanelli, Lousto, and Zlochower’s black hole simulations as some of the most exciting research taking place. 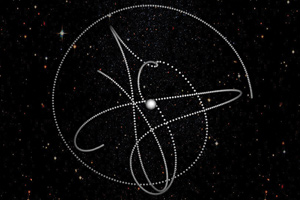 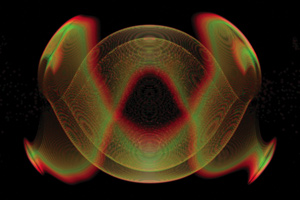 Scientific Visualization: Dr. Hans-Peter Bischof, an expert in framework design and associate professor of computer science, specializes in bringing black holes into view through computer graphics and animated movies illustrating the center’s results. “The science done at CCRG is very difficult to explain to the general public,” Bischof says. “A movie is one way to capture the essential information and let it speak for itself.”

In late 2007, the History Channel’s The Universe: Cosmic Holes featured Bischof’s visualizations of black holes based on Campanelli, Lousto, and Zlochower’s research.

About the same time Discover published its interview with Thorne,Campanelli’s team simulated three blackholes evolving, orbiting, and eventuallycolliding, another computational feat neverbefore realized. The simulation of multipleblack holes, processed using the center’s supercomputer cluster—newHorizons—tested the method designed for two masses and confirmed a robust computercode free of limitations. The resultsrevealed the distinct gravitational signature a trio of black holes might produce.

Nearly three years later, Thorne remains impressed by the quality of research coming out of the center. “Members of the center have displayed amazingly good judgment in choice of research problems and remarkable skills in solving those problems,” says Thorne, the Feynman Professor of Theoretical Physics, Emeritus, at California Institute of Technology. “As a result, they are world leaders in extracting, from numerical simulations, major new insights into the dynamics of warped space-time, and they are laying key foundations for the worldwide search for gravitational waves.”

Numerical Relativity
“In order to confirm the detection of gravitational waves, scientists need models for the anticipated gravitational waves coming from space,” says Campanelli, who was named a fellow of the American Physical Society in 2009.

A black hole or neutron star found in nature would be influenced by the gaseous environment in which it sits, the matter that surrounds it, and the unpredictable interplay of electromagnetic fields. To model these extreme astrophysical conditions, scientists at the center are taking Einstein to the next level, augmenting his field equations describing space-time with equations allowing for electromagnetic fields and hydrodynamics, and ratcheting up the complexity. 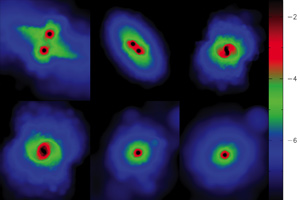 When Stars Collide Near Supermassive Black Holes: This sequence of images simulates a stellar collision occurring near a supermassive black hole. According to Dr. David Merritt, the resulting star’s spectral properties mimic characteristics of a younger star, which may explain the population of young stars near the center of the Milky Way Galaxy. 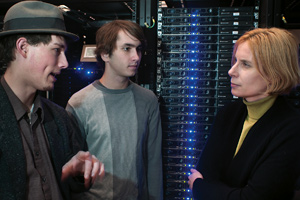 Powering Science: Simulating the extreme regions of the orbital parameters requires the use of supercomputers, where simulations can still take months to finish while running 24/7. The CCRG team is helping to shape the next generation of supercomputer power by using available resources in novel ways and developing computational tools to enable new science.

Galactic Dynamics
Merritt, a pre-eminent astrophysicist at the center and professor of physics, studies the evolution of star clusters and galaxies with the gravity Simulator, a special-purpose computer for simulating galactic nuclei. In collaboration with Dr. Clifford Will at Washington University, Merritt is using gravity Simulator to test theories of gravity using stellar motions and has completed the first simulation of the entire cluster of stars at the center of the Milky Way.

“Stars close to the supermassive black hole should feel the effects of general relativity, which will cause their orbits to deviate from the predictions of classical gravitational theory,” Merritt says. “The holy grail of such measurements is to test the so-called ‘no-hair theorem,’ which states that all properties of the space-time around a black hole are determined by just two numbers: its mass and its spin. The spin of the Milky Way supermassive black hole has not yet been measured, but stars moving in orbits with periods of one year or less should show the effects of the spin, which drags space-time around with it, causing orbits to gradually precess.”

High-performance Computing
The CCRG team is helping to shape the next generation of supercomputer power by using available resources in novel ways and developing computational tools to enable new science.

Researchers at the center use supercomputers to simulate with mathematics and computer graphics what cannot be seen directly.

Simulating the extreme regions of the orbital parameters is computationally challenging because black holes have different masses and different spin or rotation parameters. Cyber infrastructure and computer code must be adapted to deal efficiently with extreme cases.

“Our research is competitive at the highest possible level,” Lousto says. “To keep at the top you have to keep up your computational power. These simulations can take months to finish, running 24/7 on our supercomputer.”

The team recently upgraded its supercomputer by 50 percent, adding 20 double nodes—each containing eight processors—to the original 85-node cluster. The additional power will help the team adapt its algorithms to model space parameters. The group was allocated 3.5 million computing processing units on the “Ranger” supercomputer housed at the Texas Advanced Computing Center in Austin. According to Lousto, this represents the equivalent of using 400 of the computer’s processors around the clock for an entire year.

The relativity group is one of two already awarded time on the latest super supercomputer still under construction. The team is helping to optimize the architecture of the machine known as Blue Waters, scheduled to begin operation in 2011 at the University of Illinois’ National Center for Supercomputing Applications. It will consist of more than 200,000 processing cores and is expected to be the most powerful supercomputer in the world for open scientific research.

Into the Future
The detection of gravitational waves stand to confirm Einstein’s theory of general relativity and introduce multimessenger astronomy—a coupling of data collected from the gravitational and the electromagnetic fields.

For more information about the Center for Computational Relativity and Gravitation, visit http://ccrg.rit.edu.