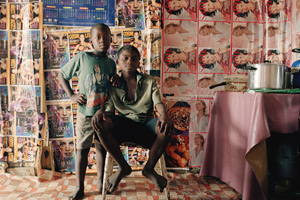 Before clicking the shutter, photographers invariably direct their subjects to smile.

Zwelethu Mthethwa doesn’t do this.

He’s looking for something deeper, truer than a quick snapshot.

“I come from a culture of storytellers,” he explains. “In my own work, I’m interested in how cultures evolve, and telling the stories of people’s lives.”

Mthethwa ’89 (master of fine arts, photography) has received international acclaim for his work, much of which chronicles life in South Africa since the end of apartheid in 1994. He’s made portraits of shantytown dwellers, sugar cane workers, coal miners, women who perform the hard labor of recycling bricks to earn enough to survive. Even his photos of empty rooms are portraits of their absent occupants.

“I’m interested in people who were marginalized,” he explains. In answer to a question, he adds, “I choose to photograph black people because I want to know myself better.”

He grew up in Durban, South Africa, in a “100 percent black neighborhood.” As a youngster, he enjoyed going to movies at the community hall, typically spaghetti westerns and samurai movies. He liked to draw and paint, but “I didn’t know anybody who was an artist.”

At age 14 or 15, he received a camera as a gift and started taking photos of people in the neighborhood. When it was time for college, he enrolled in a pre-med program because “Everyone thought I would make a fine doctor.”

Soon, though, he grew bored with the studies, but a teacher who had seen his drawings and paintings encouraged him to switch to art. Mthethwa was accepted into the Michaelis School of Fine Art, University of Cape Town, where he was one of only two black students. After graduating, he was awarded a Fulbright scholarship that allowed him to come to RIT in 1985 to pursue a graduate degree in photography. It was unbelievable good fortune, he says. 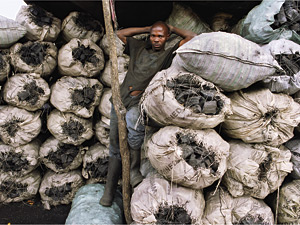 “My life is full of magic.”

RIT provided a strong technical foundation and his first exposure to color photography, which wasn’t taught at the University of Cape Town. “But the bonus for me was the students,” he says. “There were students from all over the world – Japan, Finland, Israel and other countries. It made the debates and discussions richer, very global.”

Some three years later, he returned to South Africa with a master’s degree and high expectations. But it was difficult to earn a living as an artist. Mthethwa taught, then worked at a department store.

“But I never abandoned my art.”

After two years in retailing, he resigned, determined to devote himself to photography full time. Then the University of Cape Town hired him and he taught drawing and photography for seven years, continuing his own work on the side. An important breakthrough came in 1997, when his work was included in the second Johannesburg Biennale, a major international art exhibit.

His images are difficult to overlook. For one thing, they’re vast, as large as 6 feet by 4 feet. The portraits are classically composed and technically flawless. The subjects gaze directly through the lens and into the eyes of the viewer.

Mthethwa creates this sense of connection between subject and viewer by developing relationships with the people he photographs. It’s not always easy, he says, but he gradually persuades people to open up their homes and sit for him by allowing them a chance to tell their stories. “It’s important to photograph people the way they would like to be photographed.”

Afterward, Mthethwa makes sure each subject receives a copy of the finished photograph.

He shoots in color, having come to the belief years ago that black and white photography tends to be anthropological, presenting people as specimens rather than human beings.

Plus, color captures the aesthetic in the way people dress and decorate their homes that Mthethwa considers essential. His photos reveal people who place a very high importance on making their homes beautiful – even if those homes are made of cardboard and decorated with advertisements cut from magazines.

His approach has brought success. For the past decade, Mthethwa has been a full-time artist, pursuing his own projects and sometimes working on commissions for clients such as The New York Times. His photos are in galleries, museums and private collections worldwide, and he’s had more than 35 solo exhibitions. (The Jack Shainman Gallery in New York City is his primary outlet.) A significant career milestone came earlier this year, when a monograph, Zwelethu Mthethwa, was published by Aperture.

“The monograph is a rare achievement,” says Ken White, associate professor in RIT’s School of Photographic Arts and Sciences, who has known Mthethwa since his student years. “Aperture is one of the top publishers in the field of photography.”

In conjunction with the publication of the book, Mthethwa visited Los Angeles, New York City and RIT, where his presentation drew an audience of more than 100 students and people from the community.

“It has changed my way of looking at things,” he says. The ability to see the images immediately, rather than sending film to a lab and waiting days or weeks to see the work, is very helpful, especially in remote locations.

His work continues to be focused on people, as it has been since he started.